Some oak leaves buckle as they dry in the sun, making a small clicking sound.

Sap is rising and there were glistening caps of liquid on the coppiced twig ends of the hornbeam cordon. Sap also fell from the birch in occasional drops and the twigs would bleed if cut.

Deep purple twigs that have blown down in winter storms are lying all over the Green Sanctuary - almost a protective net.

Yesterday I saw a small bird (chiff chaff or willow warbler) ferreting around the area. Maybe a new arrival or an overwintered bird.  It seemed particularly interested in the box bush.  Today I saw a wren and a robin while there were two hedge sparrows playing catch-me-if-you-can in the medlar.

Also yesterday I scraped some of the black patch that covers Butterfly Rock where it is bare of moss. I could discern no particular structure when I looked at it down the microscope later and it maybe that the sandstone itself turns black naturally if kept moist much of the time.  I have put it in on damp blotting paper in a small plastic container to see if it 'develops' in any way. 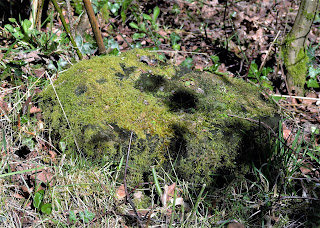 The wild onion bulbs have mostly divided underground and have produced many thin, sea green 'chives' over the last few weeks..  'Is there such a thing as a chive I wondered and in modern culture there is a verb 'to chive', e.g. Keep Calm and Chive On (KCCO). 'Chive on' seems to be a bit like 'rock on'.

I started to look at lichens..