The cold weather from the east brought frost and snow to the Square Metre in mid-February but most of the snow had gone by 14th or 15th of the month. 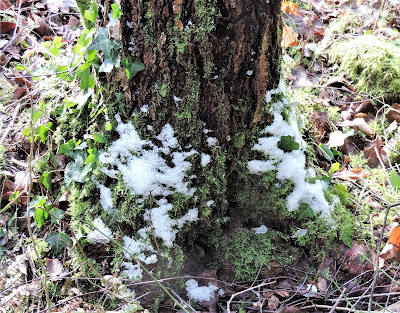 A small amount remained at the base of the north side of the birch tree, that part of the Square Metre the sun cannot not reach.  Generally the quadrat is warm and sunny, but this area at the back of the birch must have a relatively cool and moist microclimate.

A short distance to the north east is the entrance to an animal's route through the bushes from our neighbour's garden (see below). Such features of the countryside are, or were, known as 'smeuses'.  It has been suggested that the word 'smeuse' is a corruption of 'meuse'. This is thought by etymologists to derive from Middle French 'muce' meaning a hiding place and was in widespread use in England in mediaeval times. It seems to have nothing to do with the river Meuse.  The s prefix could come simply by running one word into another, e.g. 'it's a badgersmeuse. 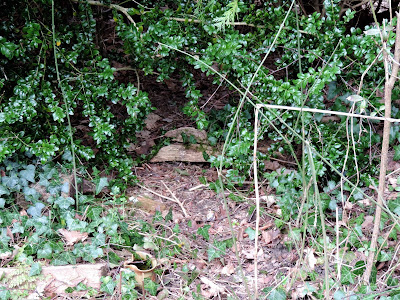