I try to visit M3 every day and usually write enough words to fill up a side or two of a standard 5 inch x 3 inch index card. Today I said:

A dusk visit after a day at Woods Mill. Wild silver y moths dash through the still, cricket-haunted air on a grey blur of wings. There are quieter midges and mosquitoes too like dust motes in the gloom.

Blackbirds sound the alarm in the wood and somewhere there are crooning pigeons.

No rain today and the ground looks brown and dry, but high above the quintet of flowers – ragwort, hogweed, rosebay, knapweed, hypericum - plays on like the band on the deck of the Titanic.
No comments:

Ragwort in the heatwave 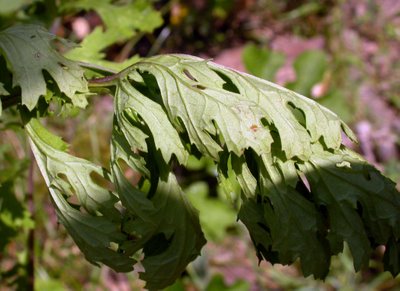 In the hottest part of the day the leaves on the ragwort Senecio jacobaea in The Metre all turn upside down, exposing the somewhat silvery underside to the sunshine and presumably thus reducing water loss.

It is remarkable that they do not simply wilt but actually manage to turn through 180 degrees. This indicates there is some mechanism within the leaf stalk that twists one way or another as the temperature rises.

There was a little rain this evening, but it scarcely wet the ground. However, most of the plants do not seem particularly stressed yet.
No comments: 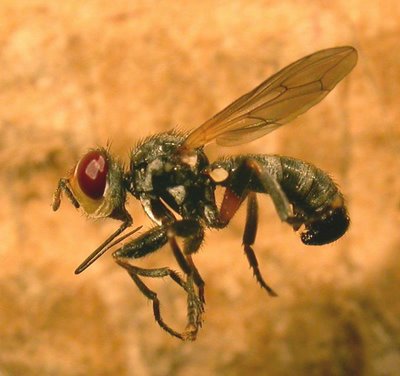 Late this afternoon I was giving some detailed scrutiny to the ragwort in M3 when I noticed a small, unusually-shaped fly visiting some of the flowers. I tried to photograph it, but is was too fast and eventually I caught it.

It turned out to be a Thecophora species parasitic on solitary bees.

Again, as with the smaller plants, I often first spot things like this through binoculars having sat quietly for a while. Many entomologists, I suspect, walk through an area, but rarely stop, wait and watch, so they just do not see many of the things that are about.

I originally had this down as Zodion cinereum and I am grateful to Jere for correcting this.
No comments: 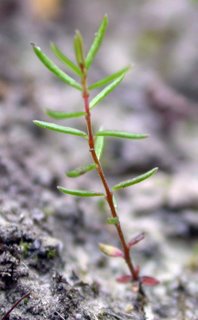 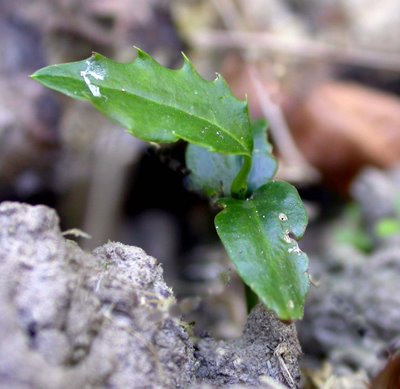 In cutting back some of the longer vegetation I have discovered two plants in The Waste that I have not previously recorded in this project. One is a holly, Ilex aquifolium, and the other (I think) bell heather, Erica cinerea.

The first of these is growing close to the southern edge of M3 while the other is in the bare soil of Great Plantain Desert. Both were discovered using close focus binoculars and the heather in particular is very tiny and inconspicuous.

Holly seeds have a long and complicated germination pattern. The seed may travel through the gut of a bird in winter and the embryo starts to develop during the following warmer months. It then needs a period of cold stratification before germinating in its second spring. So, at a minimum, the seed of my holly settled into its position in winter 2004/5.

The bell heather is, I think, unlikely to be a natural arrival as our nearest wild heather patches are some way away. We do grow a few plants in the garden, or it may have come in as seed on my boots - who knows. Given the right conditions I think this and ling, Calluna vulgaris, are quite good at spreading themselves provided they can find open,non-calcareous soil.
No comments: 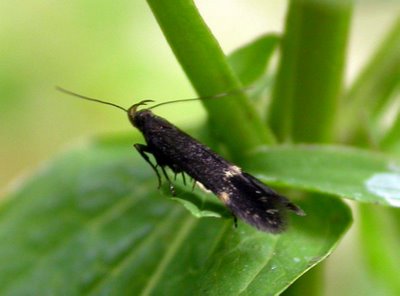 As I sat contemplating life, the Universe and all that by M3 this evening, I noticed a small black insect resting in a leaf axil of one of the square-stalked St. John's-wort plants. I managed to get a photo before it flew off and saw it again a few moments later on a figwort leaf.

It was a two-spotted neb moth, Eulamprotes atrella, a tiny micro whose larvae feed on St. John's-worts. I made no attempt to capture the insect and am confident that it can be safely determined from the photo. This is a first for M3 and the only previous Sussex record in the Sussex Biodiversity Record Centre's database is from Cow Gap at Beachy Head.
No comments: