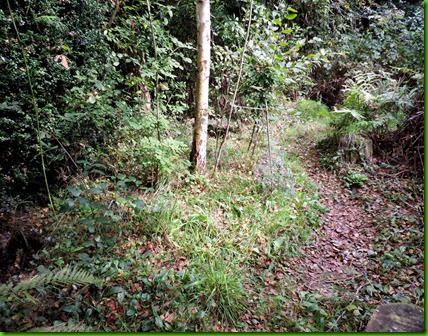 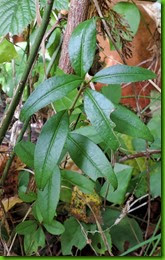 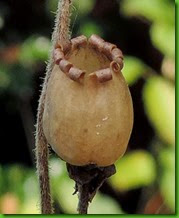 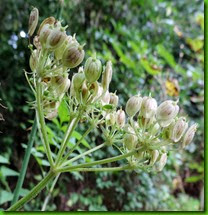 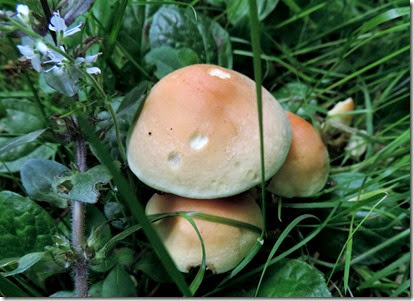 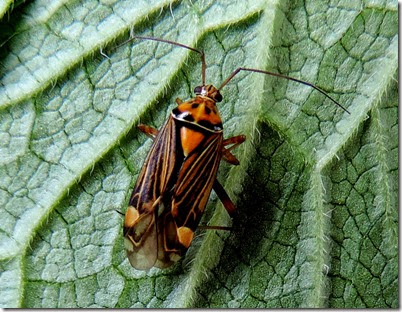 Thoughts on the future 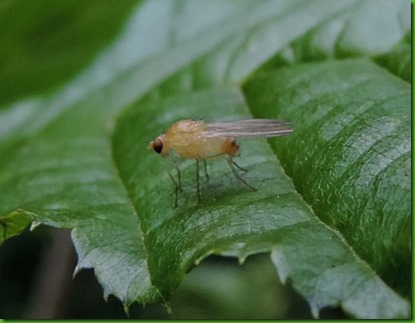 I have just finished reading The Ash and the Beech, by Richard Mabey. Mostly the book ranges widely over our human attitudes to woodland over the centuries and our current confliction between 'natural' and 'artificial' (do woods really need to be managed etc.). It made me reflect, of course, on quite what category the Square Metre falls into.

My purpose in constant intervention is, perhaps, to preserve perspective - the short and the longer views, a hole in the Universe. But apart from that what happens, happens: I trim and weed to the minimum necessary to stick to my purpose, but I do not plant or sow anything or introduce fauna.

It is important to me to preserve a sense of ease, of connection to everything else that is there, to let species interact with each other as well as with myself. It is a space to reflect, to meditate, to achieve calm, balance and a sense of proportion in this troubled world. My intercessions are only to achieve and conserve these ends (il fine giustifica i mezzi - falsely attributed to Machiavelli). But there is no end. If I am no longer able to visit, the vegetation will close over and TSM merge back into whatever surroundings the future holds. Like the Hovgaard Ridge microcontinent below the waters of the North Atlantic between Greenland and Spitsbergen, its place in the sun will have gone and it will lie hidden among the many millions of other square metres comprising the surface of the Earth.

And, of course, if the Earth should one day explode into an ever-drifting and dispersing cloud of stardust there will be no co-ordinates to determine where the Square Metre might once have been. There will no longer be any ‘where’.

I have been reading The Ash and the Beech by Richard Mabey (Vintage Books, London. 2013).

In chapter 3 Mabey explains the importance of John Evelyn in promulgating the idea of planting trees as opposed to natural regeneration. Mabey comments "But as a philosophy, a policy, woodland creation was regarded as faintly eccentric and probably unnecessary. Why waste energy planting trees, when, since the time of the Creation, woods had done it so very successfully themselves?" 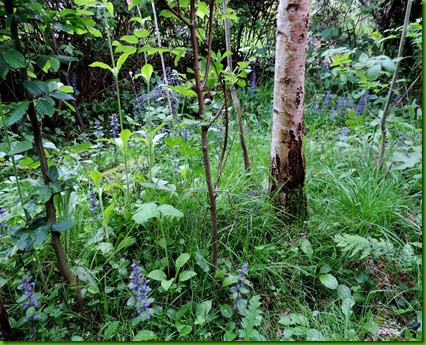 The picture above from the Metre and its immediate surrounds makes this point.  There are 10 trees in the foreground of the picture, though some are difficult to see.  The obvious ones are, from left to right, hornbeam, birch, sallow, birch again and ash.  In addition there are oak, holly, hazel and hawthorn.

All these have appeared of their own accord, unaided by me, though they do, to a certain extent, have to be protected from rabbits.

I am struck too by how much TSM now looks like woodland with its bugle, ferns, lanky grass and, of course, the trees.

There are now several baby common hawthorns (Crataegus monogyna) and they seem to have done particularly well over the last year. 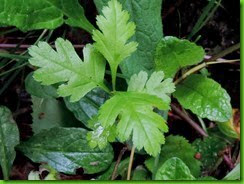 Mostly the bugle is doing well too, but some plants are not so vigorous and have their leaves mottled with yellowish.  I suspect this is a virus of some sort.

At about 4.30 in the afternoon a tawny owl called loudly from the tall incense cedar, Calocedrus decurrens, maybe 10 metres from TSM. The call was almost piercing and must have carried far. This owl, and maybe its mate, have been hooting since last autumn and could be nesting in Churchland Wood, but today was the closest I have known one.

The new, strong rose shoot that I spotted a short while ago has been bitten off about 15cm above the ground.  I suspect it is a rabbit and its teeth have gone straight through the stalk but it has not eaten any of the shoot: the upper part was still hanging to the stick I used to try and protect it. 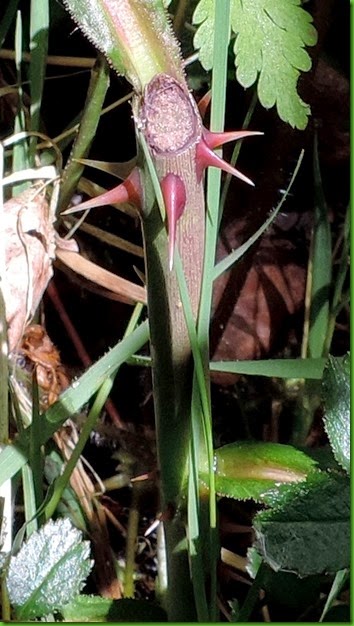 I noticed that the lower part of the ash tree, where the bark is several years old, has thin grey lichen growing on it.

The air is full of sallow seed-down blowing from the goat willow to the south. It is like the first snow flurry of winter but each downflake hangs slower in the air, drifting among trees and bushes, perpetually agitated by eddies and thermals, carrying minute germs of life to wheresoever they may find a hidden lodging.

The bugle is at its best now and I suspect we have more spikes than in any previous year.  Perhaps it rather likes wet winters. 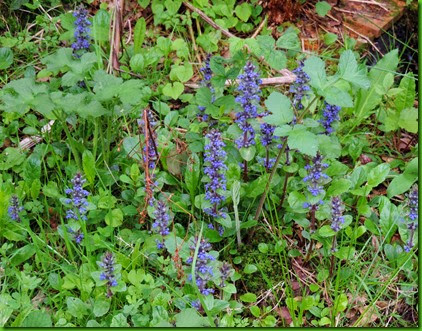 Pleasant, sunny spring weather has brought on the plants and brought out the insects. Today I removed my wire cage exclosure from western Troy Track since it looks very ugly and has failed to produce anything of interest within apart from two hazel seedlings with a third (nibbled) just outside the exclosure. Three seedlings within a few inches of each other indicates that there had been some sort of nut horde buried there. Interesting as the nearest source of hazel nuts is some distance away. 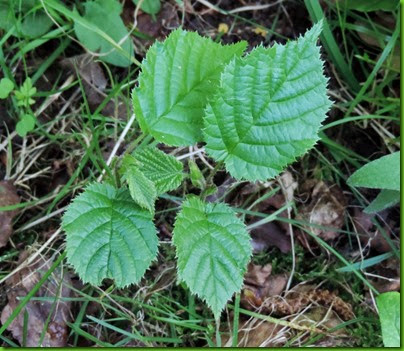 Using my close focus binoculars I watched a common pill woodlouse, Armadillidium vulgare, questing about in the sunshine to no apparent purpose. There was a rather splendid black beetle, probably a Carabid moving rapidly about among the vegetation and often flying from one place to the other. Twice it climbed about half a metre up the trunk of the sallow at high speed before taking to the wing. I saw the first of the wrinkled ants, Myrmica ruginodis, for the year dragging some kind of booty across Flat Stone. Other insects include a 14-spot ladybird, Propylea quattuordecimpunctata, and the copper hoverfly, Ferdinandea cuprea, both sunning themselves on leaves. 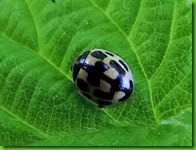 Roses by other names

The roses in TSM seem to be growing very vigorously this year and flowering cannot now be all that far away, though maybe not for a year or two.

We have two species of wild rose in TSM, the field rose (Rosa arvensis) at the top and one of the dog-roses.  The latter has been there since the early days  of the project and is one of the canina aggregate. 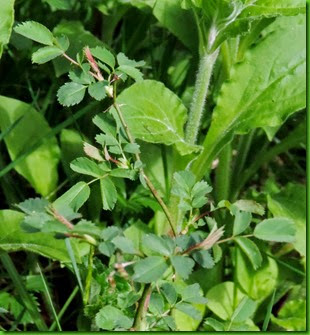 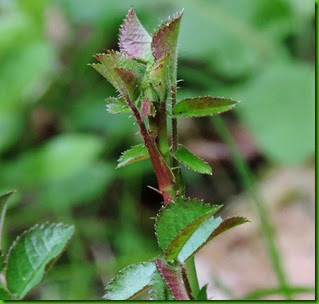 A carder bee was busy on the bugle flowers. 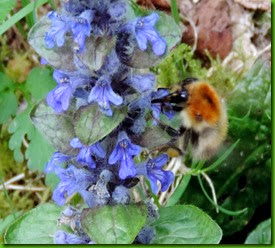 Some of the leaf stems on the ragwort rosettes are an enchanting purple colour. I wonder why: it does not seem to have much evolutionary advantage and might well attract the attention of pests and predators. 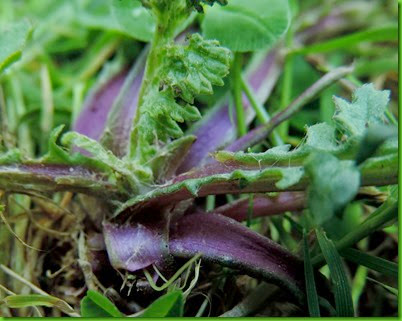 Marsh bird's-foot trefoil seems more abundant this year (maybe the wet winter?). There is figwort here and there and many black bryony seedlings that never seem to come to anything.

The ground to the north now has more of a woodland appearance with dead leaves, sticks and withered stalks and the grass very sparse. There was a buff-tailed bumble bee on the bugle flowers today, the third bumble bee species in the last three days.

There are some fine new shoots on the rose which I transplanted from elsewhere in TSM on 1 November 2004. Maybe I shall see it flower and be able to determine it to species level rather than Rosa canina agg.

I am always surprised at how quickly new leaves on trees and shrubs are attacked, though at this time of year it is usually impossible to find the culprits.  The hornbeam leaf below has a neat hole, but it 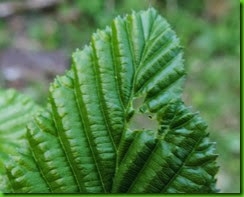 is the only damaged one I can find on the whole plant which probably has several hundred leaves.  It is near the top too which indicates that almost certainly the leaf-chomper had to climb a long way for this insignificant meal.

“If the oak comes out before the ash there’ll be a splash.”  Well, we’ll see but the oak is decidedly in advance of the ash in TSM and seemingly elsewhere in our local countryside. 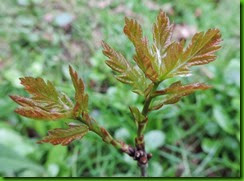 The tall birch has already flowered and is shedding its catkins on the ground. 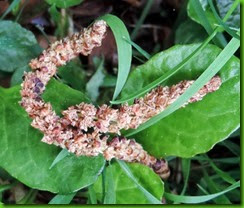 the bugle flowers and not far away this little moth Réaumur’s longhorn (Adela reaumurella) was resting on a leaf of the same plant.

The return of spring

The bugles are flowering already - quite early, often they do not start until late April or early May - and the broad-buckler fern is unfolding. Most of the trees are now in leaf, even the oak and the ashes, and I discovered another small hornbeam just outside the western border of TSM.  Flies were warming themselves in the sunshine on leaves and trunks and a beetle ran rapidly along the now mossy cherry-plum log. 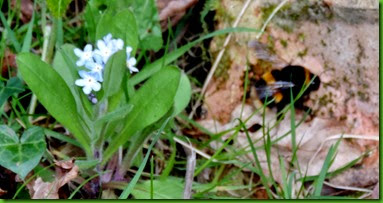 A queen white-tailed bumble bee (Bombus lucorum sensu lato) buzzed about around the logs and bricks of North Wall and the forget-me-not. This bee is, apparently, now defined as a complex of three species B. lucorum, B. cryptarum and B. magnus which cannot be reliably distinguished from each other except by DNA analysis. The new systems of defining species that are now emerging make life difficult for the field naturalist without complicated laboratory facilities and the flora and fauna of the world is becoming a more complex phenomenon than we thought it was. Nevertheless, I still want to be able to talk and write about white-tailed bumble bees without having to explain what I mean in terms of genetics and phylogeny.