The dandelion season has begun again with one flower opening on a plant in Troy Track (where they get fairly well-trodden). 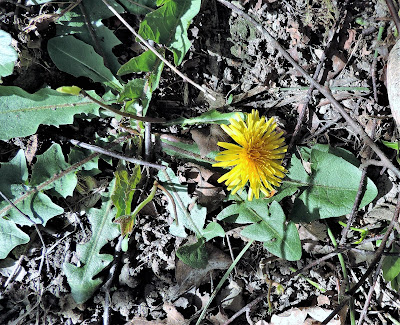 I have been looking at the many sorrel plants in the Green Sanctuary and last year's plants seem to have broken up into small-leaved clumps.  It will be interesting to see how they develop. 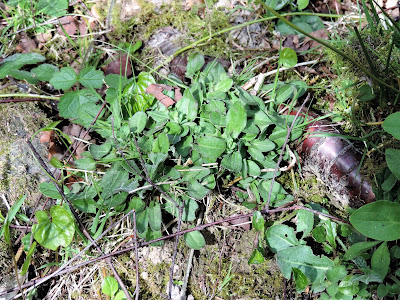 At the beginning of April, I found a yew seedling close to the original birch tree in the Square Metre.  This puts the count of self-sown tree species up to 12. 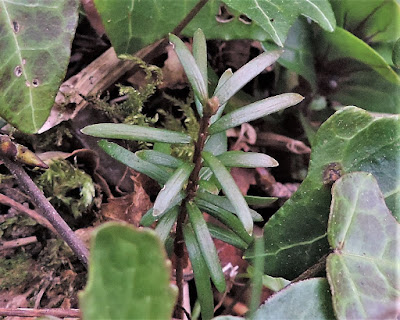 It turned very cold from about the 4 April, which slowed things down a bit.  However, the first dandelion, one in Troy Track, came into flower on 6 April.

There are dozens of sycamore seedling this year.  When they first come up they can easily be spotted by the green gold colour of the underneath of the cotyledons.  As these fold outwards the upper sides are the most visible surfaces and they are a plain green that merges with the nearby vegetation. 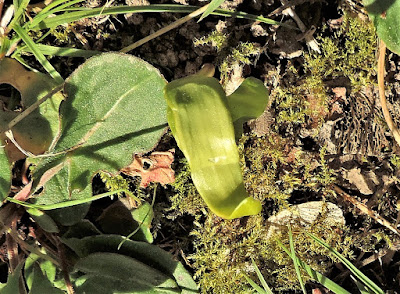 The unfurling leaves of the second year sycamore seedlings are things of wonder with their rich coppery colour and intricate folding. 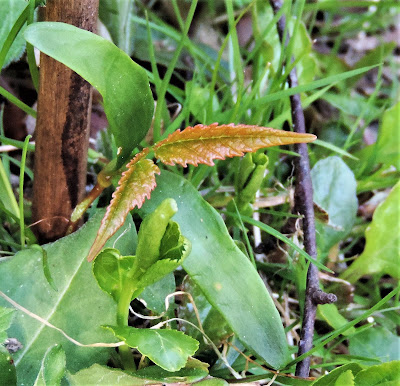 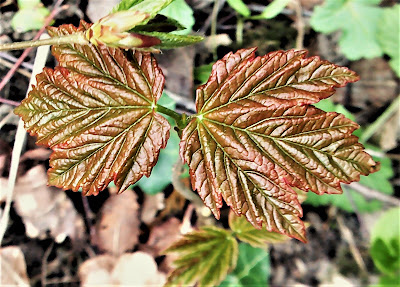 It turned very cold on the night of the 6th/7th with frost.  Many of the early flowering and leafing plants in the neighbourhood were scunnered by this and looked brown and miserable.  The cold wind continued all day on 7th and one worries about the birds, especially the insectivorous ones, as little or nothing appears to be on the wing.  However, things started to warm up on 8 April and temperatures look like returning to normal next week.

The 8th was a warmer day with the temperature rising to about 15 degrees.  A bee fly, Bombylius major flew by and settled briefly on the dandelion flower on Troy track..  There was one green bottle, Eudasyphora cyanella and a solitary speckled wood butterfly, the year's first.

I spent some time looking at the crumbling framework of Brambly Hedge.  What happens is that the floricanes bear fruit and die but, in the case of Brambly Hedge, they are not being replaced with primocanes for next years flowers and fruit.  So this leaves a tangle of pale brown thorny dead stems, with a few remnant leaves from last year.  It is not very beautiful to look at, but creates a wonderful protective cage for vulnerable plants that grow within it.  I also noticed that many of the old green bramble leaves are pock marked by something.  On most leaves as well as the pock marks, all on the upper side, there are brown patches which might be vacated leaf mines.  I suspect a Coleophorid moth may be the culprit.

On 10 April the temperature went up a little and there was some rain, though not enough to have much effect on the ground.  Despite the rather wintry weather it has been quite dry for several weeks.  By 11th the cold had returned with overnight frost, but things kept growing.  Hazel, sycamore and hawthorn are leafing well in the Square Metre and not far away flowers are coming out with the leaves on the tall wild cherry.  On 12th it was even colder with a light overnight frost and brief snow showers in the morning.  Growth is now slower than in most springs in The Green Sanctuary and some of the more tender plants around the garden are being scorched by the chill.

The weather continued cold, but with sunny days.  Very few insects though so it must be hard for the birds.  On 15th a single male green longhorn moth (Adela reamurella) landed on the grass just outside the eastern boundary of the Square Metre (see below) but otherwise there were very few of the usual April bees and butterflies. 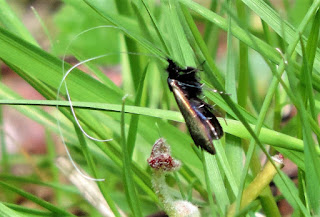 On 16th, as an additional experiment, I marked out a second Square Metre in Tana's old potato plot about 10 metres south of the existing Square Metre.  Tana dug it over last spring and the set and harvested potatoes, so it has stood as freshly turned earth over winter.  On 17th I listed all the plants already established in it.  I could identify: wood dock, creeping buttercup, red campion, sycamore (many seedlings) goosegrass dandelion, stinging nettle and dwarf comfrey.  A fine selection of weeds.  I think there was also some meadow buttercup, sowthistle and several grasses. 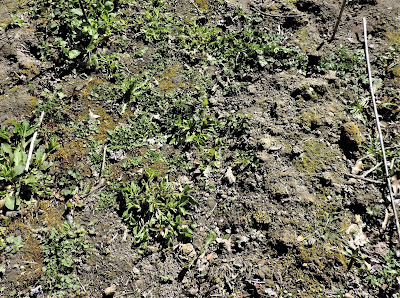 The site is open and sunny and I intend to keep most of the vegetation relatively short so that I an run over the square with a sweep net from time to time.

Also on 17th I noted a small, dark insect which might be a bee or a sawfly on a rose leaf in the Green Sanctuary.  It spent some time carefully exploring some of the newly expanded rose  leaves and I am fairly certain it was getting something sweet.  There is certainly a dearth of nectar for these early flying insects. 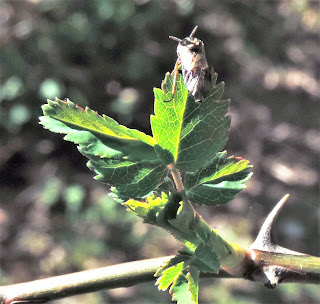 Over the next few days the weather changed to bright, sunny days and cold nights, but it was still generally cold for the time of year.  Insect numbers increased a bit with bee flies and mining bees on the wing, but butterflies are very scarce or absent.  However, on 20th April a red tailed bumblebee (Bombus lapidarius) landed in Brambly Hedge and rested for long enough for me to get a quick photo. 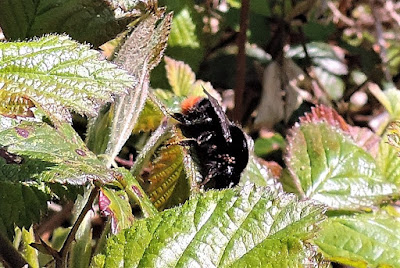 The following day, after several yoga-like contortions I managed to get a somewhat blurry picture of a feathered leaf-cutter moth (Incurvaria masculella) resting on a hawthorn leaf in the Square Metre (the foodplant of this species is hawthorn). 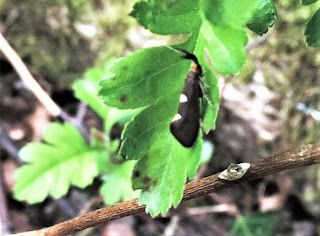 It is now getting worryingly dry and one or two friends have remarked that bluebells to not seem to be flowering in such abundance as usual.  The forecast indicates many more days without rain and often with cold drying winds.
The drought continued, with more cold, bright days through 21st to 25th of the month (and maybe beyond as I am writing this on 25th).  Dust whirls in the lane when traffic passes, lawns are looking thirsty.  In The Green Sanctuary, I have noted a small ragwort plant, a species I thought I might have lost, both the eastern and the western dandelions are flowering intermittently and the wild service tree is shooting up well.  On 22nd I spotted a green shield bug climbing up the wild onion plants (see below).  This must be about the most difficult means of ascent in the area, but maybe the insect had its reasons. 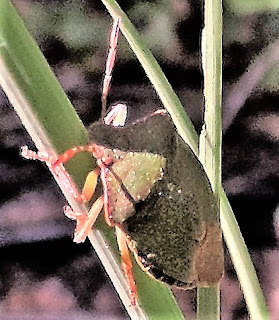 The 24th was designated Cherry Blossom Day by the National Trust and I made a small contribution by photographing one of the fallen petals of the wild cherry that had blown into the GS (see below).  A few butterflies were out too and I saw a male orange tip and a female brimstone. 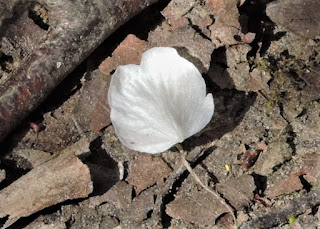 The ivy on the birch trunk is now starting to grow quite rapidly.  The leading leaves are almost black and quite shiny so that they look like small beetles.  A little bee with a distinct blue sheen was visiting the dandelions.  It might be a male blue mining bee (Osmia caerulescens) but I would have to catch and kill one to decide and I am reluctant to do that.  On 26th April the bugle spikes along Cynthia's Ridge were at their best and a speckled wood butterfly enjoyed the chilly sunshine, resting on leaves and bare earth. 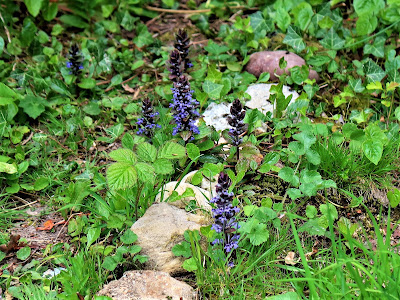 It continued cold to the end of the month, with a shower or two of light rain on 30th.  The weather people say that there has been a frost somewhere on every night of the month.  Round about the spring countryside continued to unfurl with the hooded spikes of cuckoo pint, flowers on stitchwort, yellow archangel, hedge parsley and, of course woodsfull of bluebells and thick swags of blossom on wild cherry trees. Butterflies have been scarce but I saw the first large white on 27th.  The following day there were muscid flies resting on every stone and other surfaces in the Green Sanctuary.  I see singletons of this group of flies almost every day, but the sudden increase suggests a local emergence. 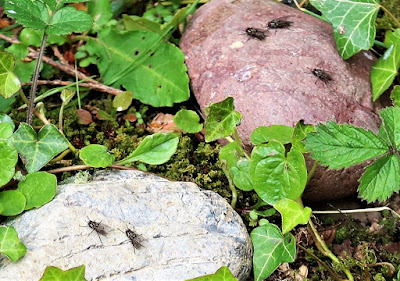 As a fitting end to the month I photographed the flower on the solitary new bluebell in Medlar wood. 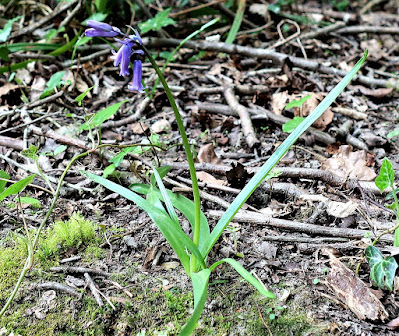