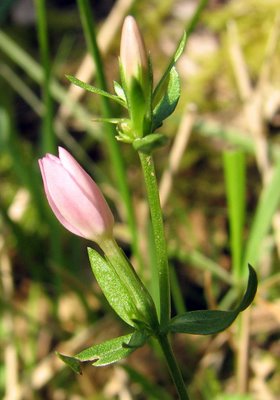 I noticed a tiny pink anomaly in the grass just in front of White Log and discovered the smallest common centaury, Centaurium erythraea, with two or three buds. Despite some warm sunshine, these remained doggedly shut and I doubt that seed will be produced.

Last year there were several examples of this species on Thistle Moor and in The Waste and they produced copious quantities of seed. A large number have germinated on the bare soil of Great Plantain Desert, but they will not flower until next year.

This October straggler must, I think, have germinated in 2005 from seed that may have been dormant for some time as there had been no flowering plants in 2003 or 2004. Welcome stranger.
No comments: 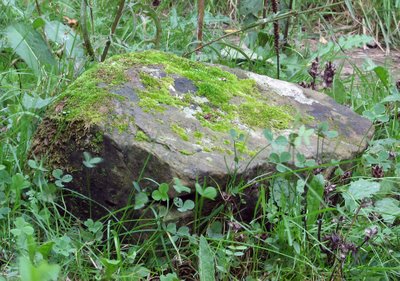 I studied Butterfly Rock today. The top, bare when I put it in The Waste in March 2005, is now a complex tapestry of several moss and lichen species scattered with bits of berry, snail shell and bird droppings like the top of a decorated cake. It just does this, unbidden by me, despite being in full sun in no shady or moisty place. It is, of course, a fine bird perch and their detritus has no doubt helped produce a nutrient layer.

The colours on this rock at this autumn season are a delight: dark and pale green, greenish yellow, black, brown and greenish grey.

In addition to the grasses, the vegetation around the rock (all visible in the picture) includes white clover, smooth hawksbeard, selfheal, herb robert, knapweed, ragwort, marsh thistle, greater plantain, sorrel and narrow-leaved vetch
No comments: 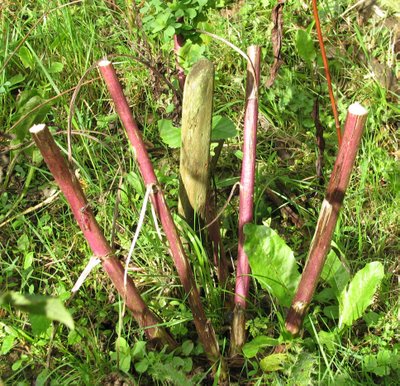 The large plant of ragwort, Senecio jacobaea, finished flowering and lost all its leaves so on 1 October I cut it back to the level of the stake of beech driftwood I call 'The Gnomon'. I have watched it through many transformations: as a small seedling, as a great cabbage of a rosette this spring. Then as the five stalks climbed upwards to well over a metre tall and attracted a wide range of insects.

Despite the summer size and vigour of this ragwort, the other plants round about, as the picture shows, seem to have grown without undue check. It is a mystery to me quite where the nutrient comes from.

Another puzzle is why large, robust plants like this die after a season while other, often much smaller species may persist for many years. Just behind The Gnomon there is a baby birch, now two years old. Above it some hypericum that struggled while the ragwort grew, but is now claiming its placed in the sun. Somehow the ragwort seems programmed to die young while the birch,in fifty to seventy years time may die due to windthrow or fungal attack, but not because it is programmed to die after a given period.

The annuals and biennials do, maybe, evolve more rapidly, but it will be many years before the birches and other young trees can reproduce. Over long periods of time have the annuals survived better in some contexts and the perennials better in others? If they have it is difficult to explain why the two now grow so happily together, though the short-lived do make good 'nurse crops' for the longer lived.
No comments: