Last night we had the first frost in the garden since early April and the hour went back this morning at 2 am, so suddenly the feeling is wintry rather than autumnal.  There are many colourful leaves on the ground. 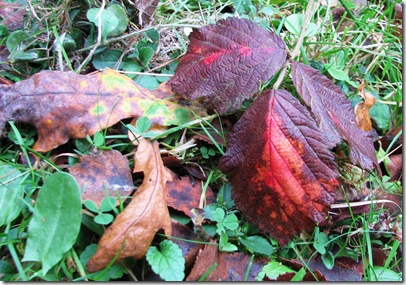 And various fungi including the group of sulphur tuft, Hypholoma fasciculare, below, a species that was flourishing here last December. 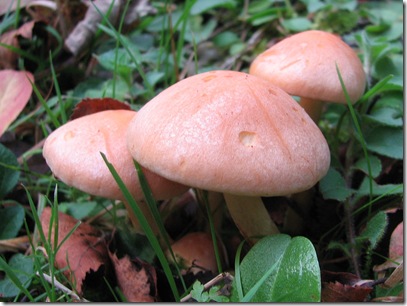 There is much activity too on the top of Butterfly Rock.  In this picture there are at least two kinds of lichen, and several mosses as well as evidence of perching birds and rabbits and ambitious tendrils of heath speedwell, Veronica officinalis, climbing up from below. 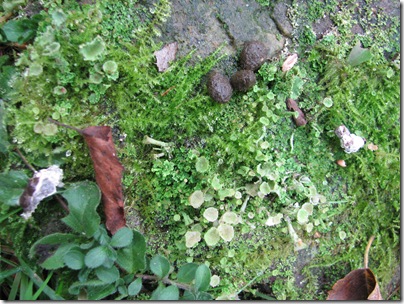 Late autumn tends to be a rather sad, dying time of the year and it is difficult for me not to reflect on the newly arrived ash die back disease, Chalara fraxinea.  There has been much talk about this in the media and most of the accounts I have heard are very unbalanced.  A better way of getting an understanding of the situation is by looking at the Forestry Commission's fact sheet on the issue:
http://www.forestry.gov.uk/chalara
The general story from the media is that nearly all the ash trees in Denmark have died, that a few cases have been found in Great Britain and that imports of ashes from nurseries abroad have been banned.
According to the FC the disease was first recorded in Poland in 1992 and infected trees have been found widely across Europe including six places in various parts of England and Scotland.  As it is a fungus presumably it spreads by spores that can travel in all sorts of ways.  The FC add that "It is believed to have entered Great Britain on plants for planting imported from nurseries in Continental Europe. However, now that we have found infected older trees in East Anglia with no apparent connection with nursery stock, we are also investigating the possibility that it might have entered Britain by natural means. These include being carried on the wind or on birds coming across the North Sea, or on items such as footwear, clothing or vehicles of people who had been in infected sites in Continental Europe."  (I wonder how they are going to investigate these possibilities).
The banning of imports might, I suppose, slow the spread of the disease, but it looks rather like shutting the stable door after the horse has gone.  Most of us remember how fast the horse chestnut leaf miner moth spread: stopping imports of its host would have made little difference.
With Dutch elm disease, the various afflictions of oak, phytophthera on sweet chestnut and other species I sometime wonder if this might be the way nature operates, killing whole swathes of trees from time to time and opening up forests for other flora and fauna.  Often a few individuals of the species attacked seem to survive, like post-myxomatosis rabbits, to repopulate the old habitat which, by then, may be relatively free of their pests and diseases since these have had little or nothing on which to subsist.
Anyway, my ash tree in Emthree (naturally self-sown) seems to be doing fine and the slight curling of some leaves is just a natural manifestation of autumn.  I have often reflected that as this ash grows it would eventually take over the whole of the Square Metre.  Maybe Chalara fraxinea will prove me wrong. 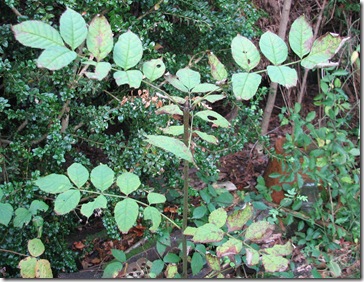