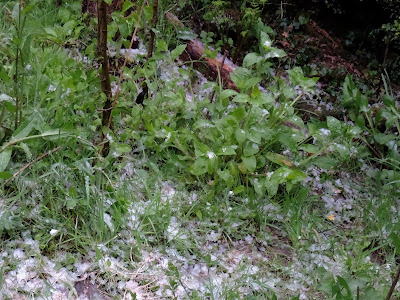 We are having a long spell of cold weather, much worse than most springs.  The day before yesterday in snowed on and off during the afternoon, and yesterday we had a hail storm in the early evening that whitened the ground. 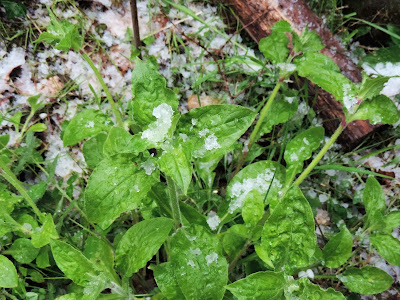 The two pictures  above are of the eastern side of Emthree with a red campion plant adorned with melting hail stones.  I don't think this passing storm has done any appreciable damage, except possibly bruising some young leaves.  Below a hailstone and a skin of melting ice on birch. 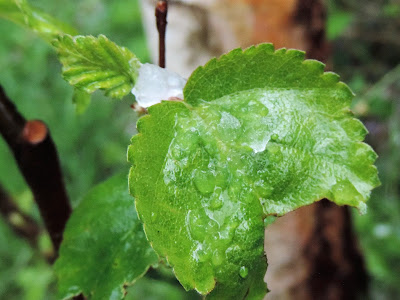 Yesterday I measured, with my walking stick, a rising frond of broad buckler fern (Dryopteris dilatata) almost in the centre of Emthree.  Checking again today I found in had grown 5cm (2 inches) in 24 hours illustrating how quickly spring advances in the present warm weather (in the last 2 days it has reached 20 degrees C).  In the picture (right) of the stem of the frond towards the bottom left hand corner shows the dark-centred scales that are characteristic of this species. 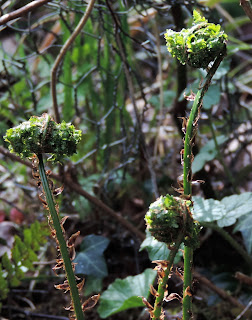 There is now an increasing amount to enjoy.  A male brimstone, or maybe the male brimstone, circled flashily around Emthree, a small queen wasp examined the bark of the birch probably looking for nest material and I thought of impending tasks.  I have started hand grazing some of the longer grass and trimming back marauding brambles: one had extended an arc of cane from the bramble hedge almost to the Square Metre and taken root in the penumbra area.  I must tie up the wild roses, clear some of the moss from the stones and designate the area where the young hazels grow to short term rotation coppice.  When they have grown one metre tall I will cut them back close to the base, perhaps one one year and the other another.

There are more insects now: a few fast solitary bees, some glittering carabid beetles often taking briefly to the wing, a dock bug labouring ponderously up the stem of the largest ash, then taking flight to expose its smoky red abdomen as, maybe, a protective device.

In the wilderness area to the south of the medlar tree I found what could be one of its seedlings or suckers.  This will hopefully one day replace the existing tree that is dying of fungal attack.  There is also a plant of what looks like hoary willowherb (Epilobium parviflorum) nearby whose identity I will have to check when it flowers.  It will be a\new record for the area (or slightly beyond it)

The long log across the centre of Emthree (east/west) has once again returned to the earth and I have replaced it with a new one of oak or, maybe, chestnut found in the nearby wood.  This could have a longer life.  The trees at the top of the picture include the sallow on the left, the birch and the ash at the end of the log and most of the rest of the Square Metre fits into the frame with the western boundary marked by the ash tree. 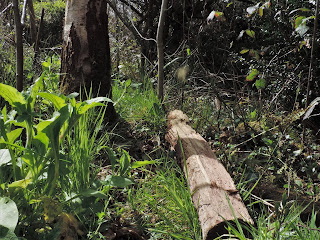 While positioning it I had an amusing accident.  I sat on the little bench I use to admire my handiwork and it toppled over backwards in slow motion, depositing me in the mass of brambles and nettles that lay behind.  I could not get up too easily from this position as my legs were arched over the now vertical bench seat and I could not get enough purchase on anything to win sufficient leverage, so I lay there for a few moments enjoying the blue sky through a filigree of birch twigs. After a bit I managed to worm sideways, get on to my hands and knees and re-assume the vertical apparently uninjured apart from a few scratches.

Another highlight of the day was the discovery of a hawthorn seedling (see right) close to the centre of the metre square.  It must have been a small plant through 2015 and now seems to be enjoying its second year.

In sunny weather flies and other insects settle on the white bark of the large birch tree to warm themselves up. 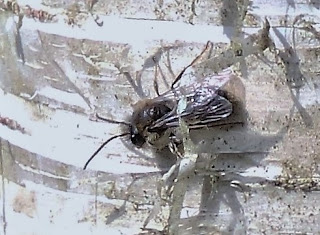 The picture is of a male small sallow mining bee, Andrena praecox, one of the many insects attracted, no doubt, to the pollen of our large male goat willow, Salix caprea, in full bloom nearby..

The trunk of the birch sheds horizontal strips and patches of the thinnest bark and these flutter ceaselessly in the wind while still attached making it harder perhaps for predators to see the dark insects against the ever-shifting patterns of light and shade created by these shifting shreds.

Enough midday sun to warm the shoulders and a feeling of freshness, almost of joy in the air that can only be experienced in spring.  The birds and animals feel it too.  A great spotted woodpecker was drumming noisily, a hollow ‘ratatatat', a few metres away in Churchland Wood.  A couple of dock bugs, Coreus marginatus, (see left) were skittering about in the meadow area on the south side of Emthree; a bee fly made a sortie across the Square and the oak tree over the hedge has suddenly burst into leaf.  This new growth is a striking mustard yellow colour and only lasts a few days before the green creeps in.  The small Emthree oak has expanding buds, but not as advanced, though the larger tree may well be its parent. 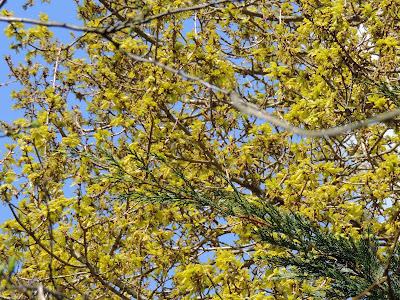 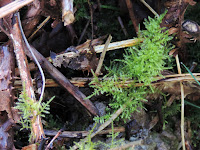 I had a further look at the base of the collapsing bramble hedge, a damp, mouldering undercroft characterised by the dingy green webs of common feather-moss, Kindbergia praelonga. Other plants already here included stinging nettle, various ferns and grasses, red campion, cleavers, creeping buttercup, herb-robert and bugle. The friable wet dead wood gives it the quality of a small nightmare creeping along a corridor of thorn-guarded shadows. 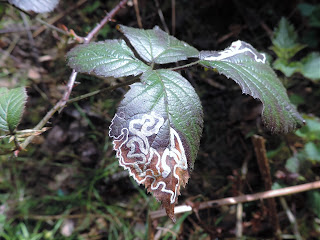 One brighter aspect of this sinister grot was a surviving leaf of bramble intricately mined by larvae of the tiny glossy bramble pigmy moth Stigmella splendidissimella.  The mines were empty, but maybe a new generation of moths will soon be emerging.

The fate of a hedge

The bramble hedge on the south side of Troy Track, the hedge that has been sheltering Emthree from the prevailing wind for many years, looks in a very sorry condition this year.  The majority of the second year floricanes have died after fruiting and many are not being replaced by first year primocanes.  As a result the whole thing is flopping over into the meadow beyond.  I am not sure why this is, but I wonder if many of the plants have simply expired of old-age. 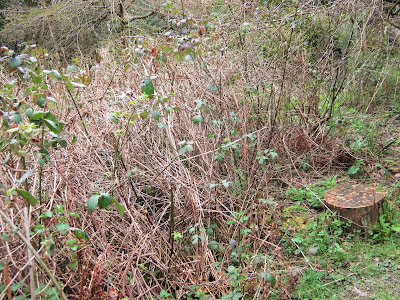 This, of course, has let a larger amount of light into the ground layer beneath the dead and collapsing brambles, though it is well-protected by the thorny, coffee coloured stems.  I will scrutinise this area during the coming year and beyond to see how it responds.  But, as Schopenhauer wrote “we can never arrive at the real nature of things from without. However much we investigate, we can never reach anything but images and names.”

5th April 2016  First spring trip was on 31st March.  As what I consider to be an omen (for what, I am not sure) as I turned the corner into Emthree, a fine male brimstone butterfly flew up from Troy Track and spiralled upwards and over the hedge – an uplifting splash of lemon yellow.  There were also some as yet unidentified Lasioglossum sweat bees sunning themselves on the white trunk of the birch tree.  Distinctive from their very long antennae.

The following day I found a fine queen of the tree bee, Bombus hortorum, nestling, almost burrowing, into the grass also on Troy Track.  It nests in trees and under eaves and has been quite common in the garden in recent years. Having been first recorded in the British Isles in 2001 it has now spread to mid-Scotland. 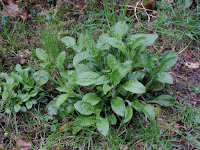 Today was the warmest of the year, though not exactly boiling.  Some tree buds are expanding rapidly.  Hazel followed by birch, then hornbeam.  Oak and ash are holding back.  The dark shagged fiddle heads on the broad buckler fern are well visible now.  There are many plants of red campion, (first noted in Emthree in 2008) in the absence of rabbits and they are more advanced than the other herbaceous plants.  And, of course, they do flower earlier.  They tend to grow in woods and other shady places so I suspect this faster growth helps them to get into flower by mid-May when there are still plenty of insects about before the before the canopy closes completely.  Is the Square Metre now woodland I wonder.

Apart from the usual snake oil remedies, the red campion has little attraction for the human (but not rabbit) forager.  This is understable as the plant contains the toxin saponin that can have a nasty effect on the digestion.