As I remarked earlier I have marked out for study a square metre in the bare earth of the potato patch tended last year by Tana.  It is about 10 metres south of the original Square Metre and is already starting to green over  I will run it as a sort of subsidiary to the Green Sanctuary/Square Metre proper and add updates in this section of the blog.

Things only started to happen towards the end of May 2021.  Dandelions, creeping buttercup, herb robert and red campions started to flower, fallow deer came and grazed buttercup, sow thistle and red campion plants.  I found a somewhat less than lively caterpillar which turned out to be a fragment of carpet. Bonfire moss is fruiting abundantly on patches of bare earth. 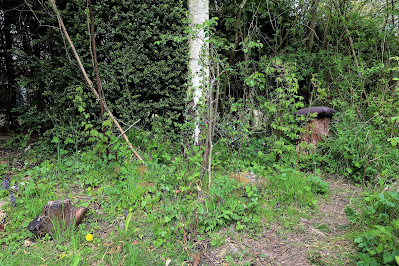 A bright May Day morning to start the month off, but it was still quite cold with an overnight temperature just proud of 2 degrees C.  Later there was some rain and for the first time in several weeks the leaves in The Green Sanctuary were sparkling with raindrops.  There were four dandelion flowers and a few new primocanes of blackberry are growing visibly in Brambly Hedge alongside a good showing of tufted vetch.

.Below is author overlooking the Square Metre on 3rd May. 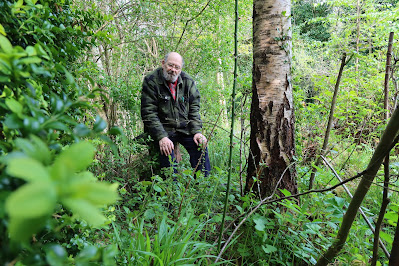 Last year there was a cluster of  American willowherb (Epilobium ciliatum) at the southern end of Cynthia's Ridge.  The basal rosettes survived the winter but one plant has turned quite bright red and I fear it is mortally infected. However, its near neighbours on the left of the picture below seem unaffected. 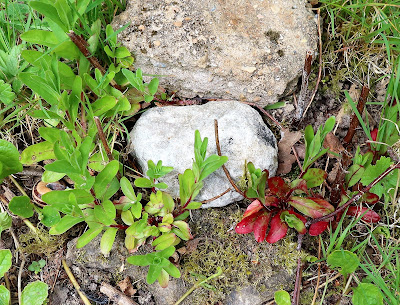 On 4th May a red admiral butterfly was enjoying that part of the garden near the Square Metre, resting with wings open on any warm surface such as bare earth and logs.  However it is still too cold for most butterflies although, on 5th, I saw one holly blue.  It continued cold through 6th May with a northerly wind.  Things continue to grow though and, in the Brambly Hedge West the tufted vetch plants have reached one metre tall.  I noted that the first true leaves of sycamore seedlings vary through green to a variety of bronze shades.

On 7th May the red admiral was still in residence.  One of  the cleptoparasitic nomad bees, probably Nomada ruficornis, (see below) was prowling about as they often do at this time of year, looking for Andrena mining bee hosts.  A bee fly, Bombylius major, was also hovering about looking for Andrena bees' nests. 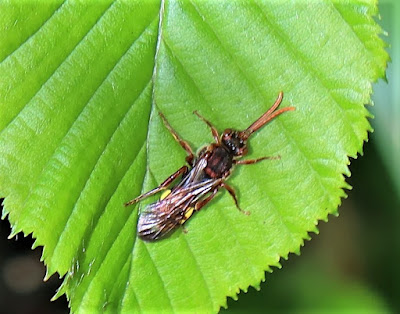 On 8th May the rain started and was very welcome after April's drought, but it continued on and off for the rest of the month with the dry and the wet making conditions difficult for nesting birds and early flying insects..  I found a female Adela reamurella on a birch leaf and the birch itself has great curtains of male catkins that give the \Green Sanctuary and interesting top dressing when they fall.

By 9th May there was much new, fresh, bright foliage - the stones along Cynthia's Ridge have almost disappeared - and the birds were singing lustily, but there were few insects for them to eat.  The fluffy seeds of nearby sallow bushes kept floating through the air and I found a tiny spider on a bramble leaf which my old friend Andy Phillips identified from a photo as Zilla diodia. 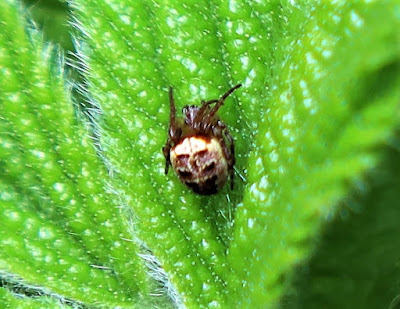 I have bought a pair of long-handled shears which are useful for trimming brambles as well as for cutting grass (especially in awkward corners).  The weather is still cold for May and the only insect I saw over seral days was a nomad bee (Nomada sp.). 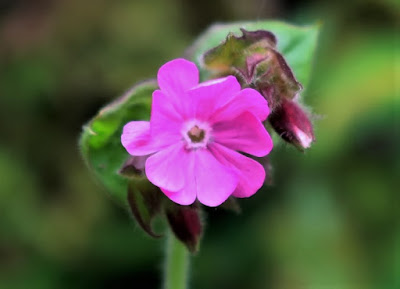 The first red campion in the Square Metre came out on 10th May.  A few days later, with the weather still mixed and cold, various hoverflies started to appear including what I think is Rhingia rostrata, a rather scarce species that often appears in The Green Sanctuary in spring. 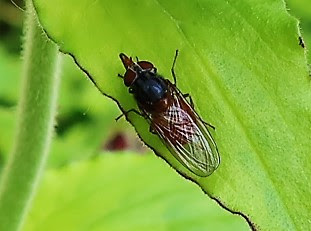 As the month wore on the rain continued to fall and the oak came out much later than the ash indicating, according to ancient custom, that we were in for a soak.  The new oak leaves also sported two different kinds of gall: round, cherry-like ones (Cynips quercusfolii) and green bumpy ones that distorted the new leaves (Andricus curvator).  On 19th May a few wrinkled ants (Myrmica ruginodis) appeared on leaves some way from the ground. 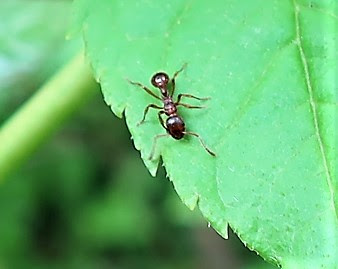 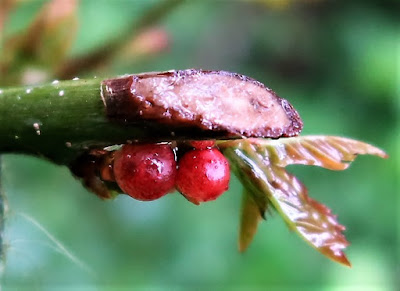 After this we had several periods of high rainfall and strong winds.  There were great pools of water in local woodlands and the ground was littered with young leaves and twigs.  I heard on one occasion that it was the wettest spring on record.  On 25th, however, a small white butterfly was flying around the Green Sanctuary area and I spotted a colony of greenfly on one of the new rose shoots (it had gone by the following day, predated no doubt), then from 26th it started to get warmer returning almost to the average temperature for the tome of year..  In the Square Metre sweet vernal-grass was nearly fully developed \and white herb robert flowers and the swaying spires of sorrel were a feature.

The beetle below is Cantharis decipiens 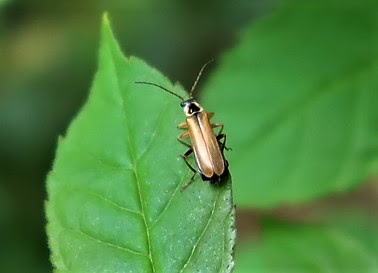 On 29th May the first flowers on the medlar appeared above The Green Sanctuary and many dock bugs came out to sun themselves on the top of Brambly Hedge.  Later in the day Tana saw a young fox sitting in the GS.

After the rains and the warmth the western group of dandelions has grown quite vigorously with their leaves standing up at 45 to 50 degrees.  The last day of the month was hot, the warmest of the year.  At 1pm many plants were drooping from the heat, though there must be plenty of water in the ground.  There were few insects but it was good see the bee mimic hoverfly, Bombylius major make a fleeting visit.