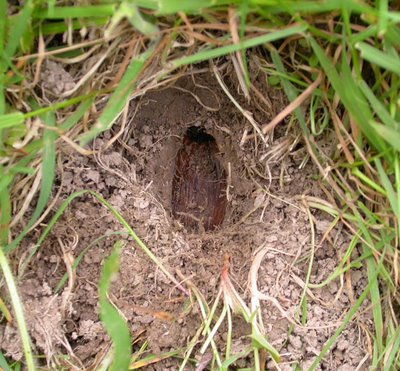 On the edge of The Waste, just in front of my green plastic bench, I discovered a hole in the earth where the grass had been parted and an animal had dug. The base of the hole consisted of half the shell of an acorn like the remains of a Viking ship burial.

The kernel of the acorn had gone and the upper shell lay discarded on the earth nearby. I had not noticed the burying of this acorn, presumably in the autumn, and probably by a grey squirrel, but its rediscovery has deprived me of a baby oak tree though I rather like the idea of acorns rather than oysters 'served on the half-shell'.
No comments: 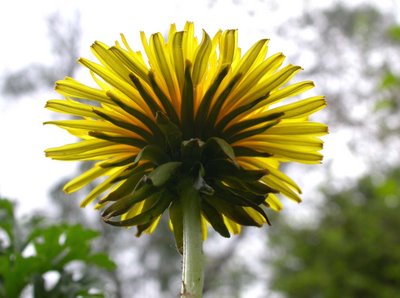 The larger of the two dandelions in the square metre itself has flowered after a two-year struggle and appears to be Taraxacum undulatiflorum, the wavy-flowered dandelion (see above). It is a common weed of wastes and roadsides.

My plant grew originally just outside Troy Track and is one of two introductions. The other was the daisy, which has died out. There is a seedling dandelion in the quadrat which I think may be either a third species or T. pseudohamatum, but I do not think it will be mature enough to tell until next year.

I caught two males of a fungus gnat, Trichonta vitta, new to the square, so it has been a good day.
No comments: 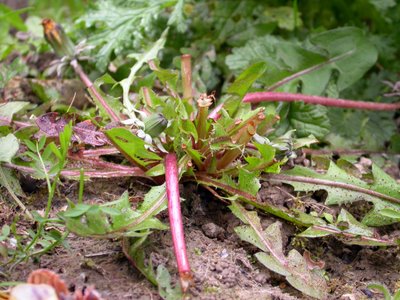 I was rash enough to leave the wire protector off the dandelion flowering in The Waste and, by morning all the flowers and about half the leaves had gone, eaten overnight by a marauding rabbit.

This sort of thing faces reserve managers with the conundrum of whether to put guards round rare plants (hardly natural) to protect them from the introduced rabbit. My cop out is to put the guard back round the dandelion (which will recover) and go on thinking about the issue.
No comments: 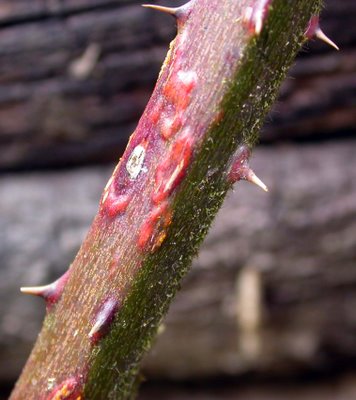 The brambles are not growing so fast, or so vigorously this year and I think they are being slowed by the cane-spot fungus Elsinoë veneta that has attacked most of last year's shoots.

Things like this are not as difficult to identify as they seem. The standard book, Microfungi on Land Plants, lists what is found on which plants and which parts of the plant - stem, leaves etc. The most likely candidate can then be selected by reading the descriptions and a web search will often bring up some good pictures.
No comments: 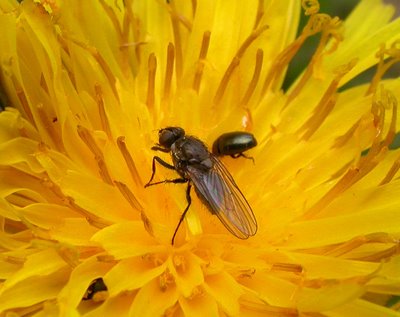 There are now two dandelion flowers out in The Waste and they are popular with early-flying insects.

The photo shows a Calypterate fly, probably an Anthomyid, and a pollen beetle, a Meligethes species, enjoying the feast.
No comments: 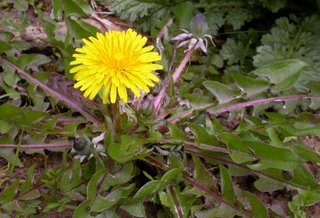 The first dandelion flower of the year has opened in The Waste and I am confident that it is the microspecies Taraxacum pseudohamatum. In Dandelions of Great Britain and Ireland Dudman & Richards (1997) say it is "a very robust weed and the commonest member of Section hamata in the British Isles, and indeed one of our commonest dandelions. It seems almost confined to these islands."

In the half hour or so I was there the flower attracted a solitary bee, a hoverfly, two or three pollen beetles and a thrips.

I cannot describe the pleasure this common 'weed' has given me from its first detection to today's appolonian climax, though there are many flowers and the seeds still to come.
No comments: 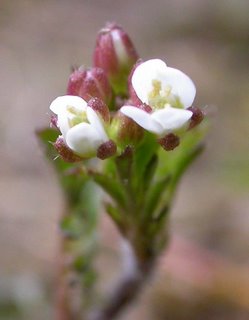 In the sunshine today the first flower of the year opened on a very depauperate example of wavy bitter-cress, Cardamine flexuosa, growing in The Waste.

One might easily think the plant was hairy bitter-cress, but I know that the many examples now growing in M3 and The Waste are seedlings from the larger plant of flexuosa that flourished, and set much seed, last year.
No comments: 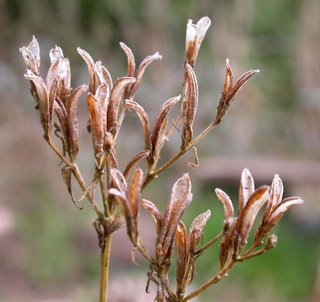 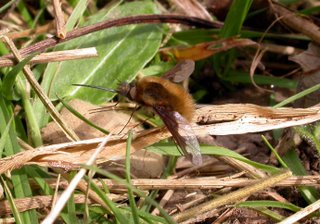 For the first time I looked closely at the now empty seed pods on the dead superstructure of last year's common centaury, Centaurea erythraea. They have split in two and curved outwards like upside down shoe horns facing each other, small launchpads for the dust-like seeds.

The bee flies, Bombylius major, are back hovering across the grass and settling here and there. The solitary bees on which they are parasitic are back too,working the blossom on the sallow or the box bush.
No comments:

The ants are back

After many cold months the wrinkled ants, Myrmica ruginodis, have reappeared under Gingerbread Refuge exactly as they did last year, but about a week later. I think they lay their eggs at this stage as in summer they move on to other sites, returning to the Refuge from time to time. Though it is cold they are very busy building earth chambers and I have seen several foraging workers out in the open.

Some of the literature indicates that the wrinkled ant has one stable nest site, though little is known, it is said, about how these are founded. However, from my observations they seem to be very restless, with the entire colony always moving to new quarters during the warmer months and disappearing from sight in winter.

The first solitary bees are on the wing now and I caught a very early dance fly Rhamphomyia sulcata (Empididae). Behind the square metre the box bush has started flowering, also rather late, and the flowers usually attract large numbers of insects on sunny mornings (not so many in the afternoon).
No comments: 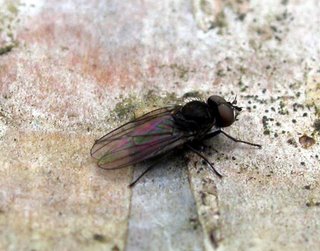 The small black anthomyiid flies of the genus Egle are very common now, resting on any pale coloured raised object to warm up in the sun. There were fifty five on my seat by Troy Track yesterday, of two or three species.

The name 'Egle' was coined by Frenchman Robineau-Desvoidy in 1830 and may refer to the eponymous Lithuanian folk heroine who turned into a fir tree. The word also means 'fir tree' in Lithuanian. However, Egle flies have a symbiotic relationship with sallows. They help to pollinate the flowers and the larvae develop in them after they have fallen, so both species benefit, neither is disadvantaged.
No comments: 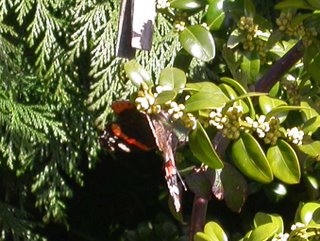 A red admiral with a large chunk out of its wing drifted across M3 in the first of the April sunshine and settled for a while in the box bush. This is early for this species and it had probably overwintered. So far as I know, the butterfly is still not considered a breeding resident in Britain and these occasional overwintered examples are not thought to be able to reproduce.

A female blackbird went hopping right across the quadrat with some bits of grass an moss in her beak. It was the one that is quite tame and often comes close to me. After visiting M3 she concentrated her efforts on some wet moss in a puddle, sploshing about like a child in the mud as she pulled and tugged at desireable strands.
No comments: