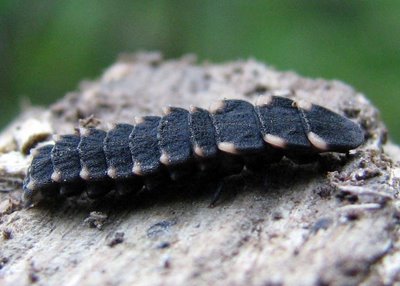 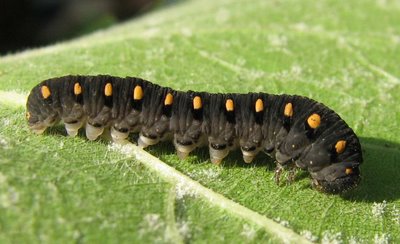 Today I found a glow-worm larva (top picture) under Gingerbread Refuge in Emthree. It was not fully grown, but nearly so and probably in its second autumn. It will remain much the same size until next spring when it will feed up quite rapidly on snails.

Four days ago in Friston Forest our group of recorders found several larvae of the sawfly Tenthredo thompsoni (lower picture) with a pattern curiously similar to that of the young glow-worm. There are several other not very closely related sawflies that have a similar pattern of two lines of orange spots on a dark ground.

I wonder what this signifies. It is not, to my eyes, a characteristic warning pattern saying "don't eat me", nor does it seem to be a camouflage that causes the creature to merge into its background (unless the spots are supposed to look like glints of sunshine on a dark ground).

Suggestions will be welcome.

The identity of this sawfly larva, inter alia, is the subject of much dispute among members of the sawfly discussion group. In may be a small Abia sericea, or a Tenthredo johnsoni. Anyone who thinks they know is welcome to comment.
No comments: 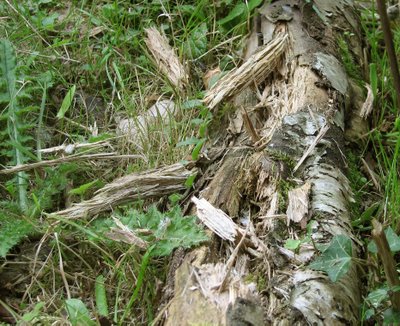 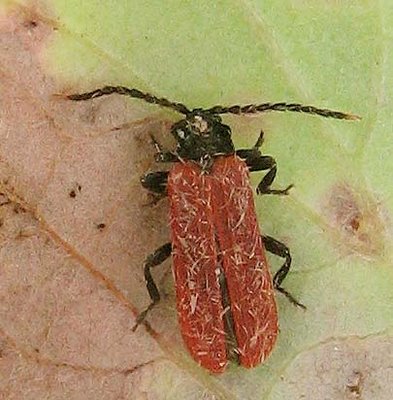 In the last 24 hours Emthree suffered one of its rather rare catastrophic events. White Log, the decaying central divider of birch, was attacked by maybe a badger or woodpecker and shredded bits of wood were scattered about all over the place.

However, I noticed a small red and black beetle, Platycis minuta, liberally dusted with fragments of shredded wood, resting in an exposed crevice. This species, which I have found in our garden once or twice before has a 'Nationally Scarce' status (Notable/Nb) and is associated with ancient woodland rather than my dry, semi-improved grassland, though there is ancient woodland 50 metres or so away.

In general appearance the beetle is remarkably close to another ancient woodland saproxylic species, the black-headed cardinal beetle, Pyrochroa coccinea, but it is only about half the size and the thorax black instead of red.
No comments: 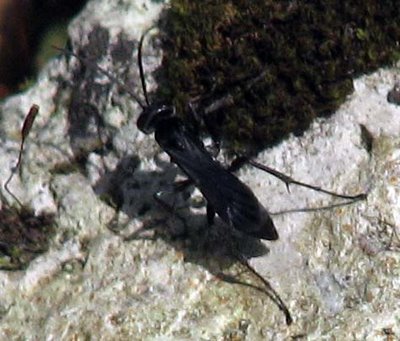 Every year we get quite large numbers of these black spider-hunting wasps in Emthree. They are the most restless creatures, running across the ground, logs or stones with their antennae in constant motion; exploring holes and crevices, occasionally making short flights.

Spiders are very aware of their presence and I have seen them draw themselves up in a 'ready to run' position if a wasp is about.

On one occasion a wasp and its struggling spider victim fell in my little Onelitre Pond in Emthree, battled away for a bit on the water surface and managed to get back on to dry land still fighting.

It may be that the current scarcity of wolf spiders is due to the activities of the hunting wasps last year. However, they may now find there is a shortage of fresh spider meat which will reduce their population and allow the number of spiders to rise again.
No comments: 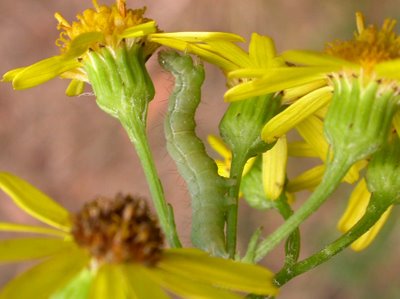 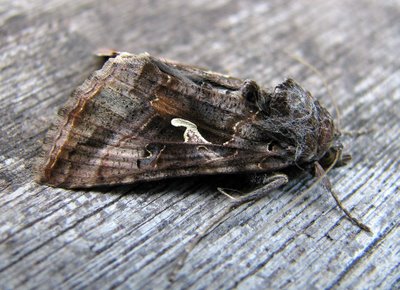 Earlier in the summer in south east England there was an invasion of silver y moths, Autographa gamma, presumably from mainland Europe. On 1 August I found the caterpillar above on the large ragwort plant in Emthree and I reared it indoors to an adult (see also above).

Some of the silk from its cocoon seems to have stuck to its front end, but it was in perfectly good shape and after posing for its picture, was released.
No comments: 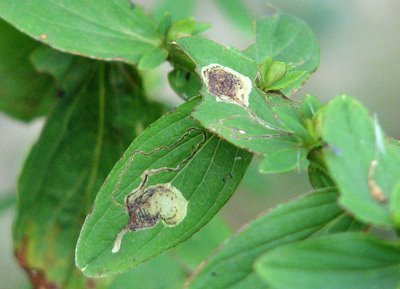 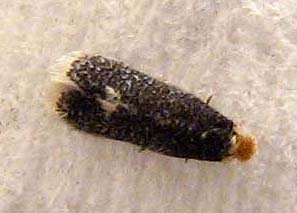 Today, appropriately for 1 September, the tiny micromoth Fomoria septembrella, the johnswort pigmy, emerged from a leaf mine that I collected in The Waste on 19 August from the square-stalked St. John’s-wort, Hypericum tetrapterum.

Though only about 2.5 mm long, it was a beautiful, wonderfully wrought creature with brown, silver-marked wings folded over its back and a cap of bright orange scales on its head.

After I had taken some pictures (not easy), I let it go by the still-flowering hypericums in Emthree and it took to the wing like a shard of brown glass.

I suppose there are some advantages to being as small as this. You can spend much of your life inside an edible leaf and are too little to be readily visible, or appetising to a wide range of predators.