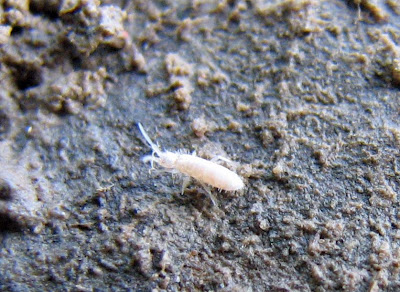 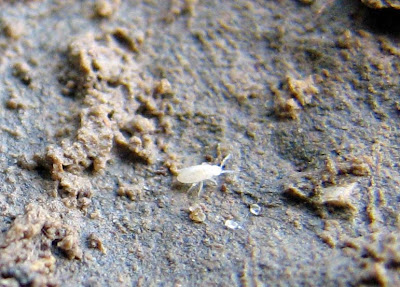 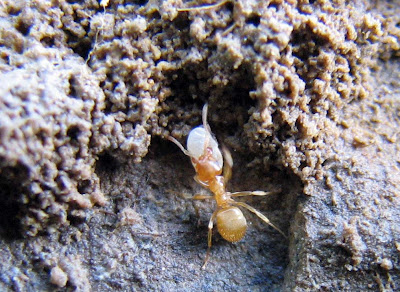 Today I prised up Purbeck Slab, a piece of local limestone brought home many years ago from Brightling a few miles west. It was gradually being covered by vegetation moving in from the sides, so I thought if I lifted it up and put it down again it could spend another four and a half years settling.
Underneath there was a colony of yellow meadow ants - not a mound building tribe in this case. The pictures show, from bottom to top, an ant with what looks like a pupa, a Cyphoderus springtail (probably Cyphoderus albinus) a tiny, fast running species almost always found in ants' nests and another very pale springtail that looks pretty subterranean.
These creatures give me an excuse to quote a passage about meadow ants from Charles Elton's splendid book The Pattern of Animal Communities (Chapman and Hall Ltd, London, 1966): “The yellow ant survives ... quite well in subterranean nests that do not have mounds accumulated above them .... The population of workers in a nest may be anything between 2000 and nearly 25,000 .... This dense army .... is engaged both in nest duties (which include transport of soil on to the mounds, tending young and such things as licking the eggs of aphids to keep them healthy for the later planting on roots), and in travelling along tunnels within a territory beneath the turf to collect food for the nest. Various small preys are captured including some of the aphid species that are farmed on the roots of plants. On one small patch about 20 yards across, in a mixture of open and meadow within the shelter of trees, a dense mixture of Lasius flavus and L. niger nest populations were found by Pontin to be farming 16 species of aphids and one coccid on the roots of various limestone grasses and herbs. At Silwood Park the mound-making populations were farming about 7 kinds of aphids on roots of 4 species of grass and 1 composite.”
No comments: 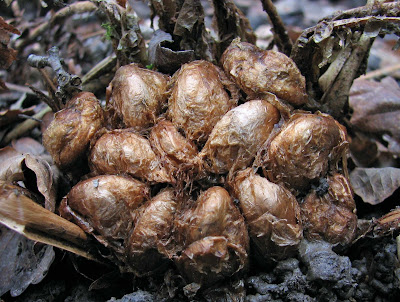 The 'eggs' at the base of one of the golden-scaled male ferns (Dryopteris affinis) are already swelling, though they will not unfurl into fronds until well after those of the the evergreen male fern (Dryopteris felix-mas) which also grows in Medlar Wood.

Two new insects today from the square metre itself: the fly Heteromyza rotundicornis and the rove beetle Anotylus rugosus. It really is spring in winter.
No comments:

Map of the project area 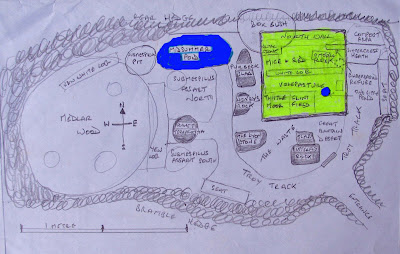 People have, from time to time, asked for a map of the Square Metre and its surrounds, including all the names that I have given the various places. So here it is (I think it looks like a Jamie Oliver recipe page). The original square is marked in yellow and the 'penumbra' stretches more or less as far as Troy Track. The part to the west was added for a second project, now defunct, but I keep it going because I can manage to do so. Medlar Wood, under a large medlar tree, more or less looks after itself, but I am interested in what goes on there as it is in shade for much of the day. I may, from time time, try to make improvements to this map (which is only roughly in scale).
No comments: 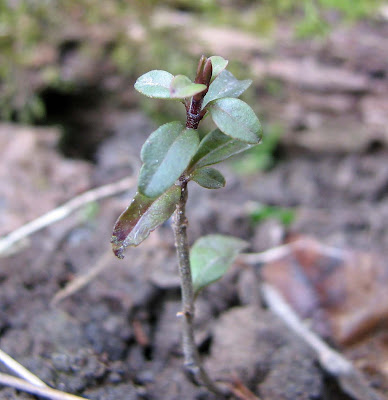 While managing Bittercress Heath today, I discovered a small shrubby plant that I have not noticed before growing among the heathers. It looks a bit like privet or periwinkle, but I don' think it is either of these. The leaf edges have some very slight crimps, so it could be a Hebe but I am not holding my breath. Whatever it is, I suspect it is not a native British plant.
No comments: 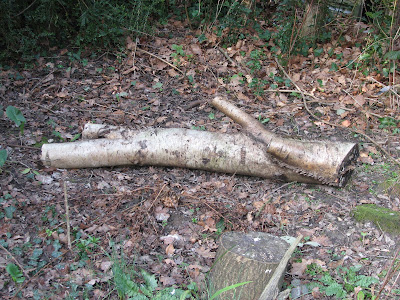 As the original birch log across the original square metre is now rapidly vanishing back into the soil having been regularly attacked by insects and woodpeckers, I decided to bring a new birch log that has been lying down the garden for a year or so and place it, as aesthetically as possible, in Medlar Wood. It was quite large and heavy so took some lugging into position. With some rough maths I calculated that its surface area is around 1.3 metres, larger than the area of the original square. I reflected on how much extra surface is created by dead wood, fallen trees etc. lying on a forest floor.
No comments: 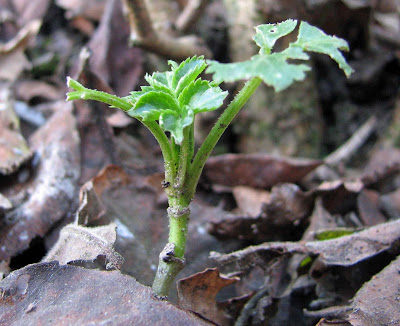 The tiny, bird-sown elder tree in Medlar Wood is already growing away quickly in this mild, late winter weather and its squeaky green tuft is a welcome harbinger: 'not waving but growing.'
No comments: 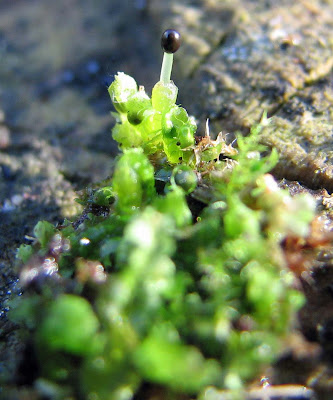 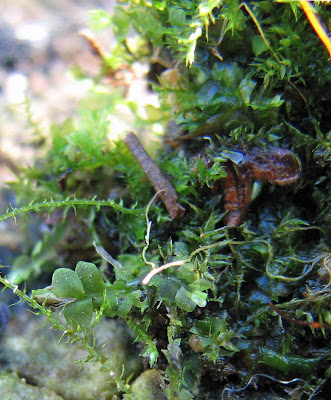 At the back of White Log, the shadiest part of Emthree itself, I found a few runners of variable-leaved crestwort (Lophocolea heterophylla), the first liverwort I have found in the square metre itself, though I have seen two other species just outside. This one has small round green leaves towards the ends of the runners and less regular ones with two horns towards the runner bases. On one there was a dark spore-bearing capsule on a pale seta (see top picture) and, although very tiny, I can see the reflection of my own head on its shiny surface: liverwort-man.
No comments: 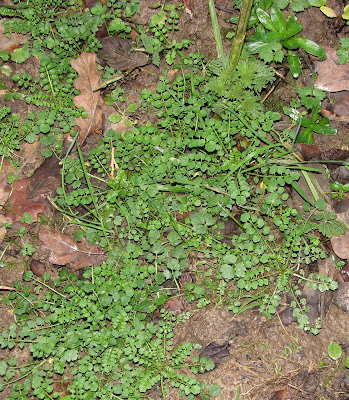 As we creep from January into February, some of the plants are moving forward too. On the southern side of Submespilus Assart there is a patch, a mosaic, of green rosettes, of wavy bittercress (Cardamine flexuosa), with one stinging nettle (Urtica dioica) shoot and some shiny green willowherb leaves. The bittercress and nettle are both edible and would make a good spring soup, though I shall let them grow in peace.
No comments: