The bushes of tutsan (Hypericum androsaemum) on the edge of Medlar Wood have started flowering and are of great interest to bumble bees.  These shuffle about on the flowers for a few seconds but are clearly not obtaining nectar.  There seems to be plenty of pollen on the crown of anthers and they may be gathering some of that. 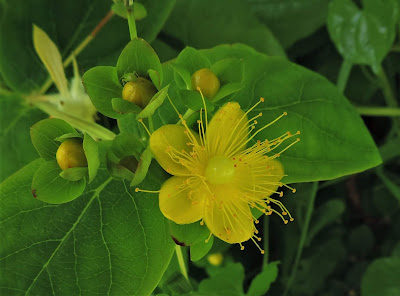 On one of the red campions I noticed a colony of almost black aphids, Brachycaudus lychnidis sp. grp (there are two very similar UK aphids from this genus on this plant).  Attending them was a small parasitic wasp which, I suspect, was summing them up as potential hosts for her eggs. 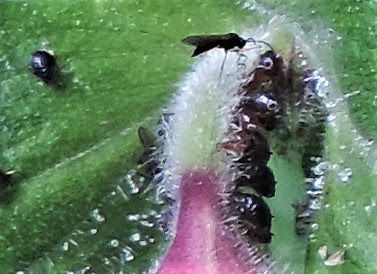 I was also pleased to see a common blue damselfly (Enallagma cyathigerum) on the edge of Medlar Wood and some way from the kind of water where it would be able to breed. 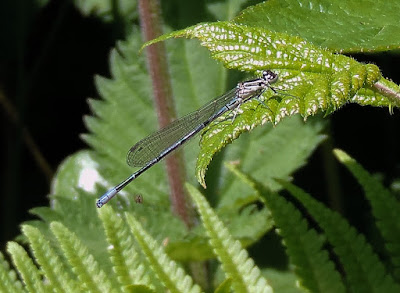 In Brambly Hedge there are three stems of tufted vetch (Vicia cracca) climbing lustily through the brambles.  They have bumped into black bryony bines at the top and the vetch has wrapped its tendrils round the still growing bryony bine.  I wonder what the outcome will be. 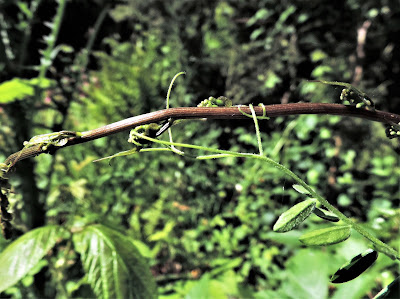 On the insect front I noticed a tiny moth climbing up a cylindrical leaf of one of the wild onions.  It was really a bit too far away to get a good picture but the one I took below is sufficient to determine it as the common tubic (Alabonia geoffrella). 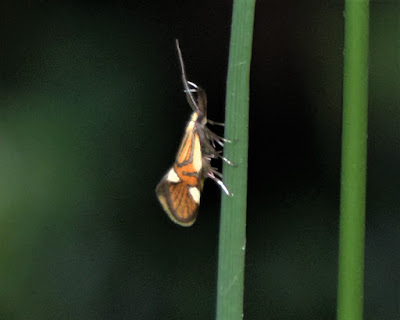 A few leaves on the cordon hornbeam in The Waste just outside the Square Metre carry the tiny galls of the mite Aceria tenellus in the angles between the veins.  There are rather few records for Sussex but it is probably widespread and under-recorded. 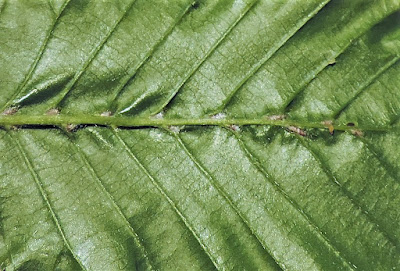 I was recently astonished to discover what appears to be a wild service tree (Sorbus torminalis) seedling not a metre from where I usually sit to study the Square Metre and its surrounds. It is in the area I call 'The Waste' about half a metre south of the actual square.  It is remarkable because the wild service is a tree I have been studying in detail since 1974 and on many occasions I have said that it does not readily regenerate from seed in the wild.  But this one has.  The nearest fruiting tree is outside our house in Churchland Lane about 50 metres away and I suspect this is the probable source of the seed.  The plant also appears to have been cut or grazed off, probably last year, but otherwise seems quite healthy.  It is difficult to believe it is not drawing attention to itself by growing so close at hand and in a place where it will be well looked after. 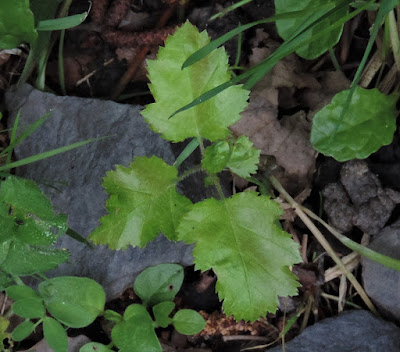 Another striking feature during the last week has been the growth of new shoots on the oak cordon.  They are about a month later than the leaves on the untrimmed oak trees in the area and they have a shining coppery brown colour.  In the past they have come into leaf before the ash trees in the project, but this year they are far behind so, according to the old proverbs, that might mean we are in for a wet summer. 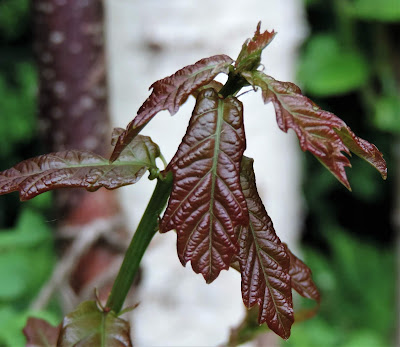