Metre as a mind mirror

I have read that some prefer to describe things from life, at the scene, while others like to recollect and write later, when back at home after am event.

Today I am doing the latter, recalling the choir of pink and blue forget-me-not flowers, the yellow of the dandelions, the violet-blue bugle pagodas and the white tipped sprays of bittercress.  In Medlar wood there is the drooping purple green hood of a wild arum (or cuckoopint).

As Timothy Morton (2007) says "Some nature writers think that they are receiving a direct transmission from nature, when in fact they are watching a mirror of the mind."

There are many wrinkled ants running about on the Lyon Stone and they appear to be building an earth particle nest in front of it, something I have not observed them doing before.

24 April 2008. Everything is doing well as the season advances. Springwatch (BBC TV) rang up today and want to re-show last year's session at Emthree and take the window box to Bill Oddie's garden in London.

Spikes of sweet vernal grass are starting to appear and are moving towards anthesis very quickly. The red campion in Submespilus Assart South has one, two, three four open flowers.

I am still struggling with the male ferns (Dryopteris spp.) and need to do more work on distinguishing D. filix-mas from D. affinis - all the fern books seem very misleading.

There are several tiny, self-sown forget-me-nots in flower a short distance from the original plant and I wonder why they are so small compared with their parent: not fertilised by snail juice and bird poo washing over the edge of Butterfly Rock maybe.

I have rediscovered the fleabane plant, but its first leaves are quite a long way from where they were last year, having travelled to the north east of Onelitre Pond, whereas last year it grew to the south of this water body.

Midsummer Pond is full of mosquito larvae and the wrinkled ants are ferreting about on Lyon Rock again.

26 April 2008. A lovely spring day. The creeping buttercup on Submespilus Assart North has an opened flower and a dandelion, mirabile dictu, is blooming in a very shady spot on the north side of Medlar Wood demonstrating how at least some dandelion microspecies will grow successfully in low light conditions.

Ants were hustling about on Lyon Rock again, but as soon as I come on the scene they disappear. They are definitely interested in the fox's poo, but just clamber about on it like mountaineers rather than searching for something to eat.

The red campion in The Waste is sending up what looks very much like a flowering stem. There seem to be two forms of this plant: one that is fairly bushy and another, often paler green, that sends up solitary, upright flowering shoots.

I think my tiny, rabbit-bitten holly seedling in The Waste going to survive as it has produced some tiny, toffee-green blimps, new buds near the shoot tip.

28 April 2008. I am beginning to believe we have only one scaly male firm, at the western end of Medlar Wood. The other three have much less of a golden cast as they unfrond and are probably Dryopteris filix-mas. But if so the books are wildly wrong.

I pinched off one of the shoot tips of the perforate St John's wort today as the plant is supposed to contain red juice called, in Germany, Balder's blood. It does not have red juice, only the normal, greenish sap. However, I did find a larva of the St John's wort beetle Chrysolina hyperici on top of one of the shoots, so the species has overwintered successfully (I found one adult beetle in Emthree last May).

There is a young plant in Great Plantain Desert which looks like hoary willowherb (Epilobium parviflorum) while halfway along North Wall in Mice & Red there are a couple of leaves that look like betony (Stachys officinalis), which would be quite a turn up (but it might be leggy ragwort).

The rabbit-bitten holly in The Waste is unquestionably producing new leaves. I am very pleased about this as I thought I had lost it.

The first dandelion flower came out yesterday - a veritable sun, an Apollo of a flower, heaven fallen to the grass. It moves me to write what Timothy Morton would probably describe as ecomimetic kitsch. Dandelions may often be regarded as weeds, but they are the opposite of a problem in Emthree. And they have an escort of dainty white wavy bittercress. Two salads together. Today I am a dandelion. 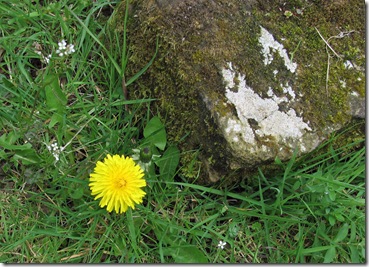 The buds on the ash and oak saplings are breaking now: the first a smoky ginger, the second rich red.

Planet Terracotta, which is full of water again after heavy overnight rain, operates as a good beetle trap.  There were two species today, one - the scarce leaf beetle, Longitarsus dorsalis - is regarded as Nationally Scarce (Notable B), though I seem to come across it fairly frequently.  The beetle is one of many a ragwort-eaters and there is an excellent account of the plant and its insect associates on the Buglife website here.

Another cold. wet day but there is now a pretty display of blue and pink flowers from the field forget-me-not (Myosotis arvensis).

One of the buds on last year's seedling dandelions to the west of Butterfly Rock is showing yellow and should be fully open tomorrow.  The flower stalks extend very quickly once they decide to go, which must help to reduce the extent to which they are grazed, especially as after flowering they lie flat on the ground again until the seeds are ripe.  This will be the first Emthree dandelion to flower this year and they are behind those in the Windowbox project where the microclimate appears much harsher, with the soil often frozen right through.

On Lion Rock there is a large fox poo, the first I have seen in Emthree.  It will be interesting to witness it dwindle in its own sweet way and to try and discover what insects might be attracted to it.

The silver sand, after rain, has settled down to a dull, damp mound - smooth and featureless.  Planet Terracotta once again has a small pool of water: an intermittent rather than a temporary water body.

Ragwort on an April morning

An early visit to Emthree on a bright April morning - everything looks in great shape.

I have not cut Submespilus Assart South yet this year because the sward has been growing so slowly.  However, I will make the first cut on May Day, then continue on a monthly basis until growth stops in late autumn or winter.  Submespilus Assart North will be left to turn into a hayfield and I will make a judgement on when to cut it (probably late July or early August).

It is quite noticeable that our ragwort plants grow particularly vigorously early in the year and they currently look like so many bunches of curly kale resting on the ground.  This vigour gives them a head start and considerable competitive advantage over other plants.  Thank heavens I don't suffer from ragwort hysteria but look forward to their summer flowering and all the insect life this will foster.

As a society our perception of biodiversity as being "a good thing", looks insincere when we are prepared to condemn a native plant and all its associates, a plant with which we have lived ever since our arrival in these islands, but apparently cannot do so any longer. 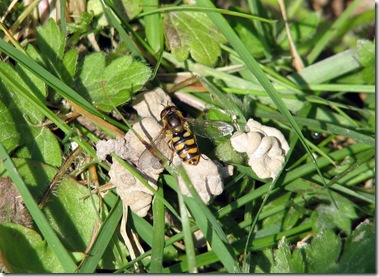 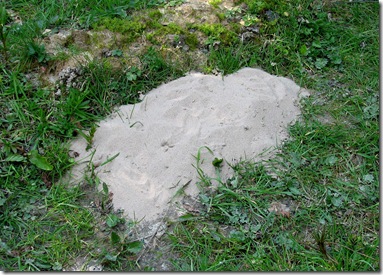 With the arrival of warmer weather insects have once again come into their own.  Today there were many hoverflies, like the Syrphus ribesii in the toppicture above, sunning themselves and nectaring on the diminutive flowers of wavy bittercress.  Another hoverfly, Melanostoma scalare, was also common these plants and a bee fly, Bombylius major, also visited them briefly.  The flowers are so tiny one would not imagine they held significant amounts of nectar or pollen.

I  bought a packet of silver sand and unloaded it on the western branch of Troy Track - I saw a man on television doing this for the benefit of mining bees and other insects.  It will also be interesting to see how it develops both in terms of fauna and flora.

The Rabbit, the cat and the fox

Today as I sat peacefully contemplating a red campion flower in the spring sunshine, there was a commotion in the bushes behind the Square Metre.  Then out rushed our cat, Spooky, with a young rabbit firmly clamped in his chops.  He ran full tilt through Medlar Wood closely followed by a fine red fox.  When the fox nearly had him the cat dropped the rabbit, which lay twitching on the ground and cat and fox vanished into the neighbour's garden.

I was inspecting the rabbit through my binoculars when the fox sneaked back and clamped his teeth firmly round the rabbit's midriff.  Suddenly he became aware of me and, with his head lowered he looked at me with brown eyes shining from his foxy face in a way that only wild animals can; a baleful half fear, half aggression stare.  Then he was off with his dinner, his smart black legs trotting back through the hedge.