Some of the leading shoots of our red campions have developed colonies of chubby, shiny black aphids over the last few weeks. These are either Brachycaudus lychnidis or B. klugkisti, species that are difficult to separate.  Sometimes they cluster in the flowering tops of the plant (see right) and they also spread out across a leaf like a herd of grazing cows (see below).

These aphids appeared before any flowers had opened and were soon attended by egg-laing female hoverflies.of the Platycheirus scutatus group.  This includes several species some of which are little known and are difficult to separate in the female sex (though I might have a go in due course). 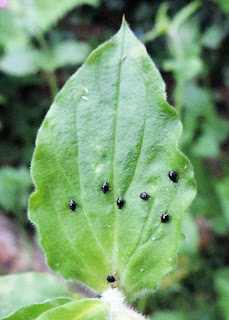 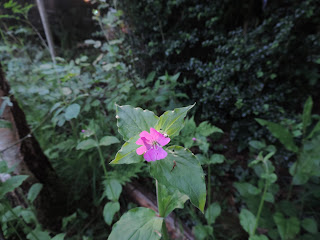 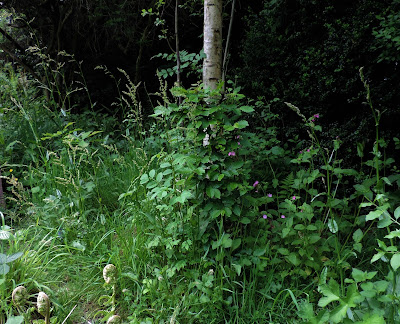 As well as red campions, the sweet vernal grass has started to flower.  The plants now cling to the southern edge of the study area where there is plenty of light. (The rear of the area is now very shady and has a woodland character). 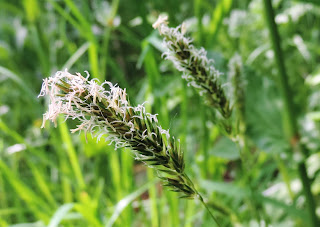 High above the ground (2 metres) and poised above Emthree I spotted a snail in a cross-roads between a spiny wild rose and a crucifix-shaped piece of ash wood.  It seems to me there is symbolism in this so close to Easter, but I leave my visitors to work out what this might be. 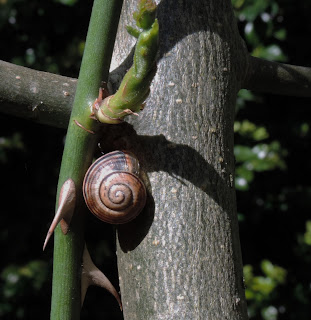 The pace of events is quickening now and the last two days have been very warm.  However, it seems to me there are nowhere near as many flying insects about as in previous years.

Not long ago I moved the bench I sit on from time to time from the east of the Square Matre to the south, but something did not like it as two nights running I found it tipped over - deer, badgers, cats: a mystery.  Anyway, I gave up putting it back in place and now sit on a rather plasticky kneeler which is actually more comfortable and allows me to haul my old bones up and down more easily. 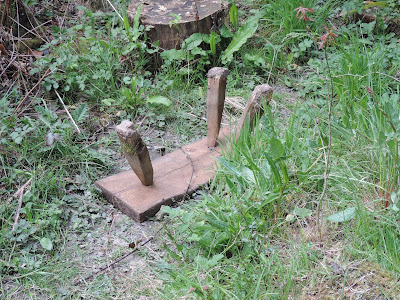 The birch tree is performing well this year and has many male catkins that fall and drape themselves over Emthree plants.  The female catkins are shorter and more stubby and do not fall from the higher branches like the males. 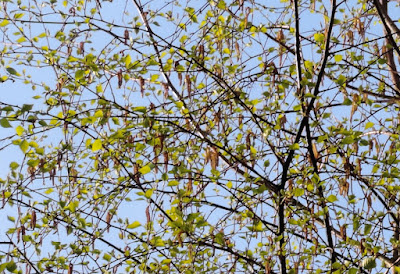 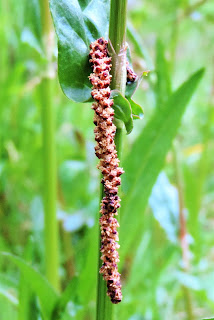 The hornbeam, kept to 1 metre tall, is now well into leaf and I notice that the buds at the top of the plant open two or three weeks later than those lower down.  This must be because the lower buds formed in the autumn, but the upper, adventitious buds have had to wait for in the spring. 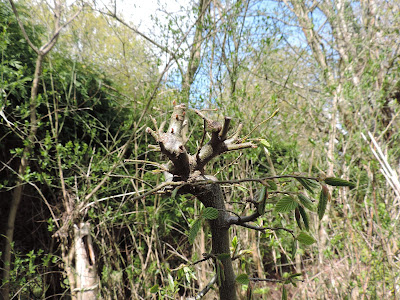