Twenty eight plants but no ants

Mice & Red, the more northerly of the two grasslands in the Square Metre proper, looks rough and untidy after the long winter.  Many fallen leaves and pallid dead grass stalks still lie on its surface.  The birds have been pulling up moss and scraping at the surface layer in pursuit of invertebrates.  They also scatter bits of wood from North Wall on the right of the picture below. 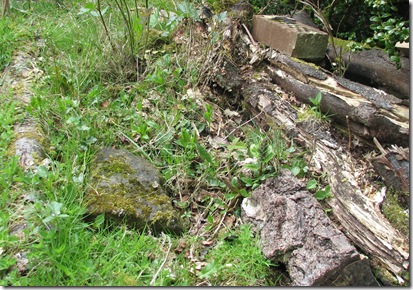 Nevertheless, many plants are developing and this afternoon I counted 28 species (there are probably a few I overlooked).  Although there were several species of grass, these are no longer dominant as they were in the early years of the project.

However, many old friends were not visible - mouse-ear chickweed, for example, and other plants are present only as singletons or in very small numbers.  Insects are also very scarce and I have seen few beetles or spiders and no ants at all though they were once abundant from mid-March.  I wonder if whatever it is that is afflicting bees is also having and effect on ants (also social insects of the Hymenoptera, Aculeata) and other groups.

Is it a rowan?

Spotted a small seedling in the south western corner of the project area near the chestnut log seat.  I thought it was hawthorn, but the narrow divided leaf at the rear indicates in might be a rowan, Sorbus aucuparia.  If it is, this will be a first for the project. 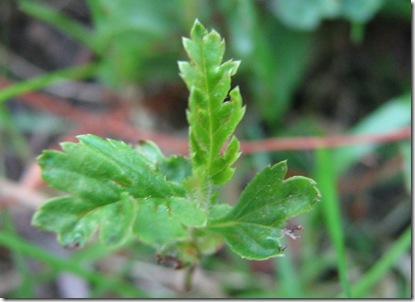 A few days ago Sammy made me a small emergence trap for insects out of a plastic food box with some nylon tights material tied over the top.  This balances happily on Midsummer Pond, the principle being that insects emerging from the mud and water will fly up into the roof of the trap from where they can be collected for identification. 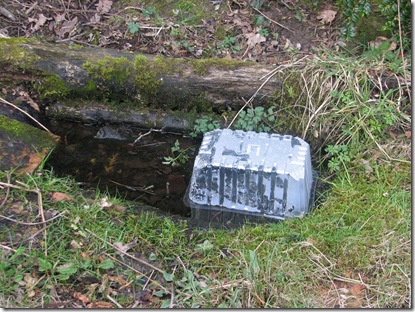 I made my first emergence trap over fifty years ago when I floated a wooden, gauze-covered contraption out onto a Wealden pond at Robertsbridge and, within a few weeks, garnered an impressive number of non-biting midge species and other insects that had spent their early stages in the pond.

Today my new emergence trap contained two species: a dark-haired biting midge Forcipomyia sp. (Diptera: Ceratopogonidae) and the non-biting midge Zavrelimyia barbatipes (Diptera: Chironomidae).  The Zavrelimyia has carnivorous larvae whose prey is very small organisms in the water.  I have found adults several times in our area, usually associated with stagnant ponds.  However, other records are from streams and cold lakes.  This raises the possibility that there are two or more very similar species with the Z. barbatipes name - only DNA could tell.

The adult midges are pretty little insects with dark-banded wings and, in the males, translucent bodies marked the black and brown. 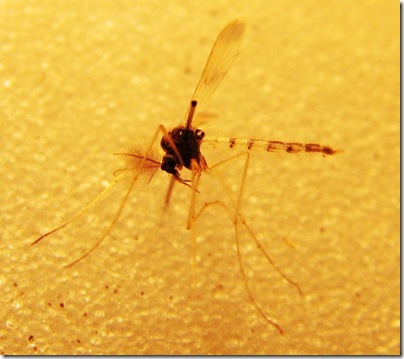 The genus Zavrelimyia is named after Jan Zavřel who was born in Třebíč, now in the Czech Republic, and who as a university professor did much research work on the Chironomidae and many other things.

With the cold weather receding a little it is getting much busier in Emthree, though flora and fauna still seems to be behind.

22 April.  Made a positive identification of a small plant of broad buckler-fern Dryopteris dilatata with one frond unfurling just behind the log across the middle of Emthree. 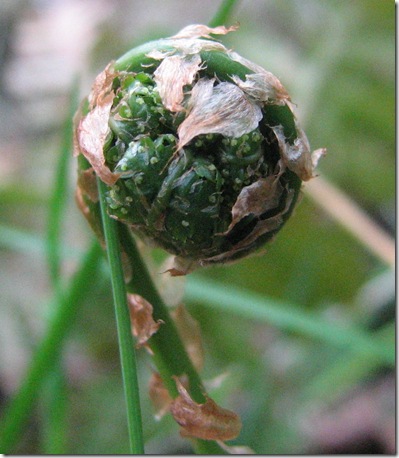 Interesting that the spore cases, the small pale green dots, are already well-formed.

21 April.  More creatures are now appearing underneath the New Gingerbread Refuge.  Today there were several pseudoscorpions (walking backwards as usual). 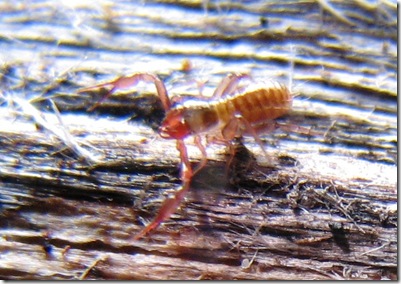 And a small black mite, a very common species in habitats like this, with a springtail next to it. I have decided to make an exclosure in the open area between the Square Metre and Medlar Wood.  The ground here is trampled by various animals and still brown and ungrateful look after a long winter.  It will be interesting to see what grazing protection delivers. 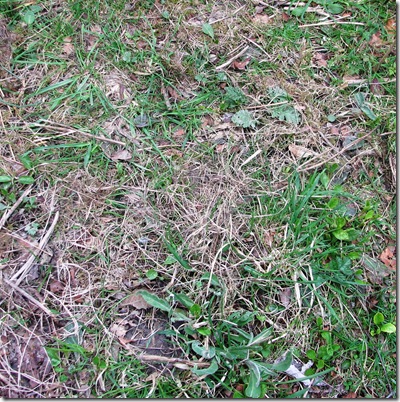 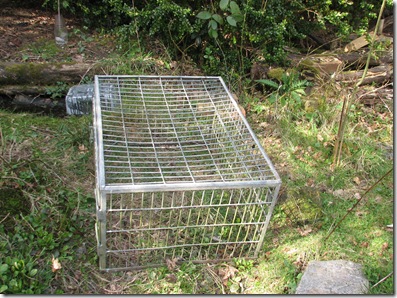 16 April 2013.  When I was about to leave Emthree I noticed what I though was a small piece of black stick protruding from the ground near the tall birch.  It is clearly a Xylaria fungus, with a stalk and a long, narrow spore bearing body (on the left).  It most nearly resembles the American Xylaria scopiformis: more work to be done on this one. 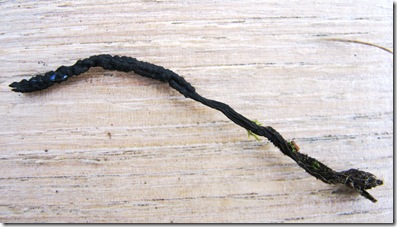 15 April 2013.  There are many tiny non-biting midges now swarming every evening in the lee of Bramble Hedge.  They are Limnophyes minimus and I suspect they breed in the mud of Midsummer Pond and other wet places in the vicinity. 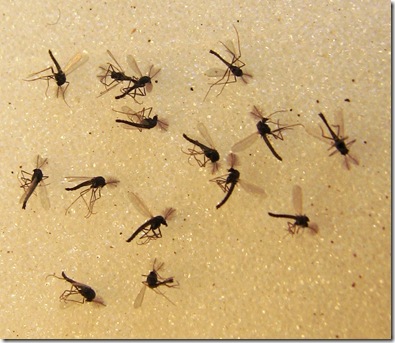 Underneath New Gingerbread Refuge a pair of pill millipedes has appeared looking very affectionate.  They are long lived invertebrates: I wonder if they mate for life.  The mollusc on the left is a discus snail. 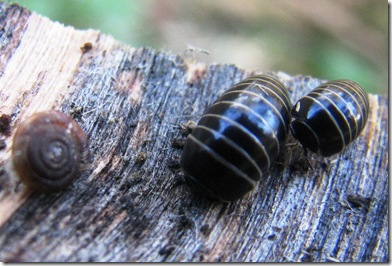 The season gets going

Today was a mixed April showers sort of day, but it continues to get warm after a long winter.  In the trees and bushes round about Emthree the birds were celebrating with a cheerful ensemble of piping and seeping.

In the Square Metre itself the bugle leaves are growing quite quickly and look like small lettuces with red-veined leaves, while over towards Medlar Wood the rather sinister sinuous coils of black bryony, Tamus communis, are emerging from the soil. 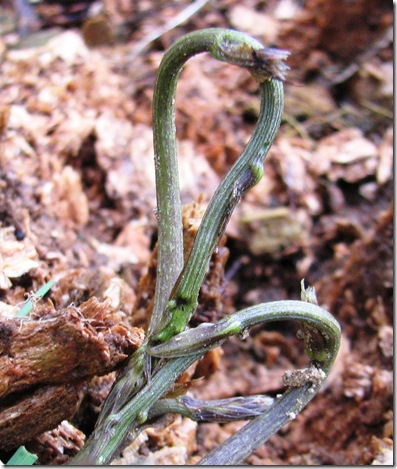 Underneath the new Gingerbread Refuge I found a fine centipede, Lithobius variegatus.  If you look along its its right hand side (from our perspective) you will see a small woodlouse (the common pygmy woodlouse, Trichoniscus pusillus I think) against the 5th body segment. 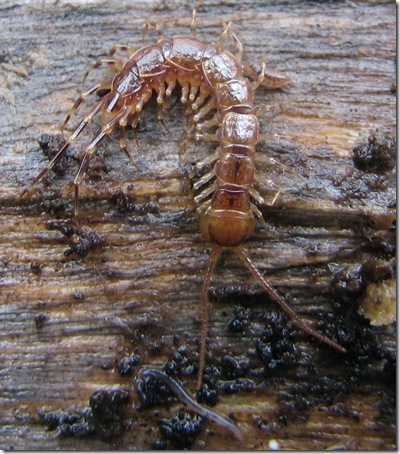 Quite a hazardous resting place as Lithobius are fierce predators.  Still, this woodlouse is said to be the commonest terrestrial isopod in Britain, so they must be pretty good survivors.

Where the sun has warmed the now discarded plastic seat, Egle flies have been gathering in the last few days when it is sunny.  Dipterist friends agree that this is due to the seat being warmer and, according to Alan Stubbs, acting as a distinctive marker indicating a good place for the flies to congregate.  Egle (there are several species) appear at the same time as the sallow blossom in which, after they have fallen, the larvae develop. 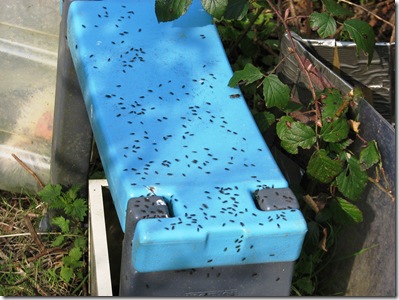