15 September 2008.  The project is five years old today.  It is a warm September morning.  There are purple knapweeds, yellow hawksbeards and St John's-worts, also yellow, in flower.  There is a late greater bird's-foot trefoil, a few purple self-heal and the cerise cockade of Cornish heath. 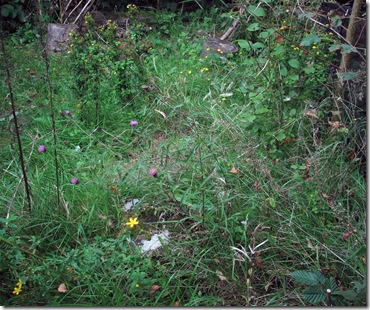 Various flies visit the flowers, bending and shaking the stalks. A cranefly (Tipula paludosa) bumbles about in my mini-Malaise trap.

The project area seems crowded now because of all the things I want to keep and so different from the first photo I took (below) just after initial clearance. 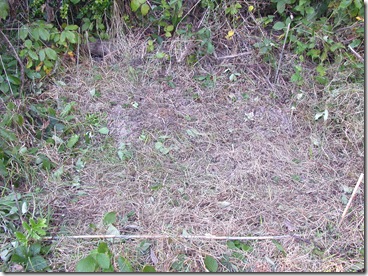 In the other world 15 September 2008 was a dark day on the global finance front.  The major American investment bank Lehman Brothers filed for bankruptcy and there were many other manifestations of what the media frequently call 'global financial meltdown'.   I am sure we will be affected in one way or another but, hopefully, I will have another five years watching my square metre.

16 September 2008.  A cool, evenly grey day withy the temperature hovering continuously at around 60 degrees F.  There is a cluster of common bonnet toadstools(Mycena galericulata) with caps the colour of the clouds on the old log by Troy Track where the lizard used to sit. On the last of the bramble flowers there were sleepy wrinkled ants (Myrmica ruginodis) searching for nectar and pollen and transmitting messages with much waving and mutual stroking of their antennae.

Planet Terracotta is dry again and there are now several moss species among the bittercress and grass seedlings - something for me to identify in winter.

My mini-Malaise trap is still not being very successful and today caught nothing.  There are very few insects about, but I was pleased to a see a fine hoverfly, Rhingia rostrata, on my late-flowering knapweeds.