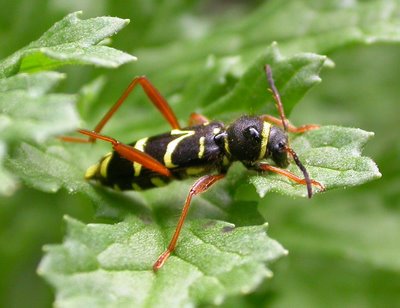 The weather remains cold and damp and the few insects that are about in the square metre looked hunched and miserable as they take shelter in the vegetation.

This evening in the top of the tall ragwort there was a scorpion fly and the wasp beetle, Clytus arietis, shown above. Notice the eye-like drop of water on its thorax. The larvae of the wasp beetle live in dead wood, usually of willow or birch, so it probably spent its early life in the birch log that straddles M3.
No comments: 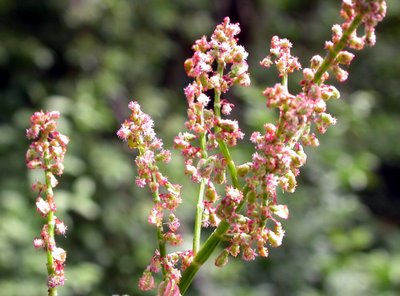 One of our young granddaughters joined me on an evening visit to M3. “Do you know what philosophy is?”, I asked as I was about to expatiate on some abstruse topic. “Is it this?” she replied, touching the pink and green flowering top of a sorrel spire with her hand. “No” I said, “that’s sorrel”, but I reflected that ‘philosophy’ did sound a bit like ‘Gypsophila’ or ‘Felicia’. A short while afterwards I asked granddaughter how many plants she could name. “Well, there’s this one called ‘philosophy’” she said pointing to the sorrel.

I shall henceforward think of sorrel as philosophy (I wondered if it was through some process like this that honesty, Lunaria annua, got its name).

The wet leaves of the philosophy and other plants are lightly spotted with round white confetti, the small petals that have blown from the nearby rowan tree.
No comments:

It rained very heavily during the night and there were maybe twenty of the 5mm long common pygmy woodlice, Trichoniscus pusillus, running about on the underside of Pitfall Rock. There are often one or two but I have never seen as many as this and I assume it was their way of avoiding the wet.

This species is thought to be the commonest woodlouse in Britain with up to 500 individuals per square metre, though I would rather doubt there are as many as that in M3.

There were also far fewer wrinkled ants under Gingerbread Refuge and it looks as though they may be abandoning this nesting site as they have done in previous summers.
No comments: 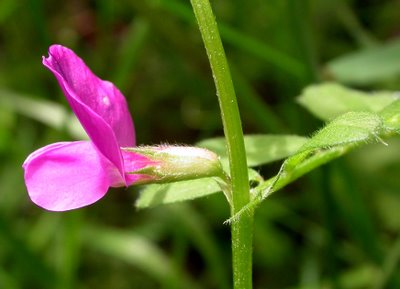 The lush May grass was weighed down by cold droplets of rain.

Walking round Troy Track flowers of narrow-leaved vetch, Vicia sativa ssp. nigra appeared and disapeared in The Waste and M3 as my angle of view changed: deep magenta starships sailing in a green firmament.

These purple punctuations, though tiny, giving telling highlights to the rain-soaked monotone of the grass. They are the sort of thing that would hardly be visible in a longer shot than that above and their landscape effect can only be fully enjoyed by direct contact with the living eye.
No comments: 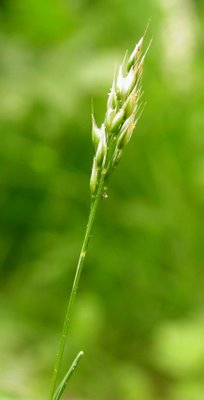 I have discovered a tiny grass, about 5cm high, growing and flowering in part of The Waste. It is early hair-grass, Aira praecox, and it must be one of the easiest plants in the world to overlook.

In addition to the one in flower there are two or three others in the same area not in flower. This is the bare patch I call 'Great Plantain Desert'. I have made this area of largely bare soil by simply weeding out most of the grass and other vegetation with my fingers. If a seedling appears, I leave it there until I have worked out what it is and I then decide whether to pull it up or not.

The mystery is how did the early hair-grass get there. I have not seen it eslewhere in the garden, though it is easily overlooked, and there are not many suitable habitats
No comments: 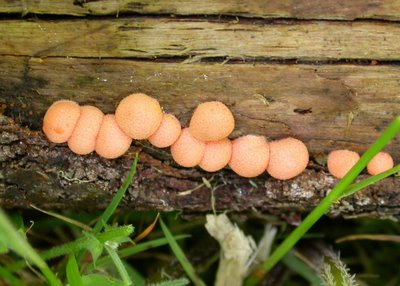 The fungus-like objects in the picture are young fruit bodies of the slime-mould Lycogala terrestre, often known as wolf's milk. They appear every spring on the birch log that divides the square metre in half.

The term 'wolf's milk' is thought to be due to the opaque, pinkish-orange droplets that often emerge from the fruits and it has been suggested that, appearing in rows as they do, they have some resemblance to a she-wolf's teats. The name Lycogala, which means 'wolf's milk' was coined in the 18th century by Michel Adanson, a French botanist of Scottish ancestry. I have not, however, been able to locate his explanation for the name and, since he left a vast corpus of many volumes of manuscript, I think I might let the matter rest there.
No comments:

Death in the dandelions 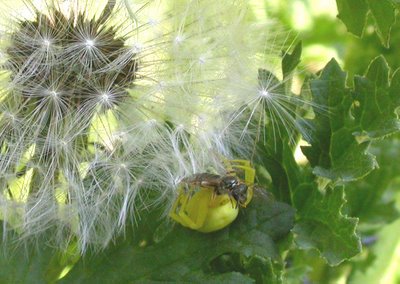 After I took what I thought might be an arty photo of a back-lit dandelion clock, I discovered a small drama.

A crab spider, Misumena vatia, had captured a solitary bee (possibly a Halictus species) and was enjoying the meal. I did not notice this struggle at all when I took the picture: it only emerged Antonioni-like after downloading.
No comments: 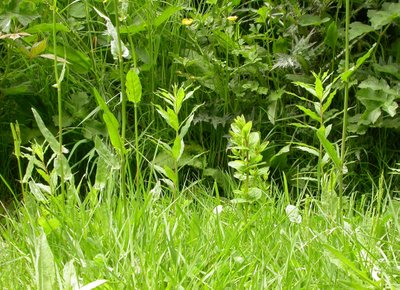 The summer has turned cool and damp, with frequent showers.

The Waste and M3 look like a fairy kingdom with towers and castles reaching skywards in groups like the downtowns in American cities: , The Sorrel Centre, , . Some of the sorrel plants have grown astonishingly tall on the slenderest stalks. It is remarkable that they have such mechanical strength (they will be tested in the gales forecast for tomorrow).

This green conurbation is a result of my keeping the grass low and the effect is delightful and mysterious, with subtle variety, mystical strength; with graceful movement caused by the weight of raindrops, or passing breezes, or insect footfall. There is a certain plant patience too, a sense of expectation: “we are ready – paciencia y barajar.”

When it is dark and late I can imagine those green towers silent and invisible, dreaming the starlight. 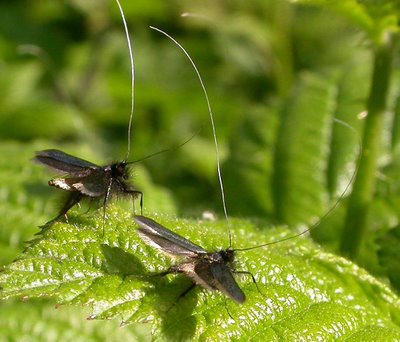 Yesterday the whole of the Meadow, including M3, was alive at 9.30 in the morning with glittering green long-horn moths, Adela reaumurella, dancing in the spring sunshine and pausing to rest on bramble and other leaves. The males (see picture) have longer antennae than the females, but otherwise the sexes are fairly similar. The caterpillars construct a small case to live in and feed on leaf litter on the ground.

The day before another small, but very attractive, moth was swarming over M3: the sulphur underwinged tubic, Esperia sulphurella. There is an illustration here. The larvae of this moth feed on fungus-infected decaying wood and are quite common in suitable habitats.
No comments: 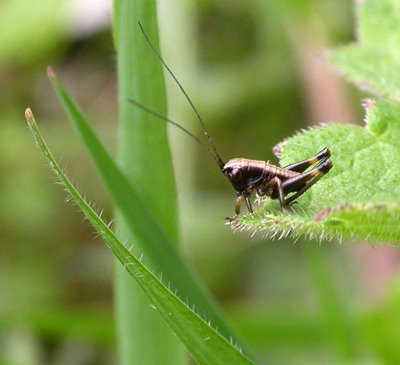 The dark bush crickets, Pholidoptera griseoaptera, have been hatching during the past week. They are one of the first cricket species to appear and are supposed to be spider mimics (though I reckon this would not afford them much protection from hungry birds). Although small they are rather conspicuous, more so than when they are larger.

I have seen one or two cricket nymphs in M3 before but, unlike the grasshoppers and groundhoppers, they seem to go elsewhere in the neighbourhood as they mature.

This species of cricket lays its eggs in rotten wood, or under bark, so there are good habitats for it in M3.
No comments: 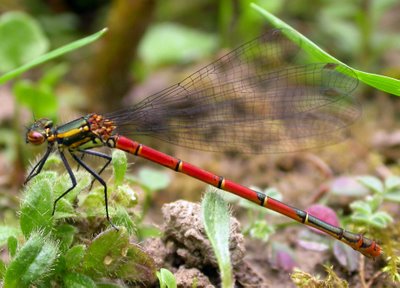 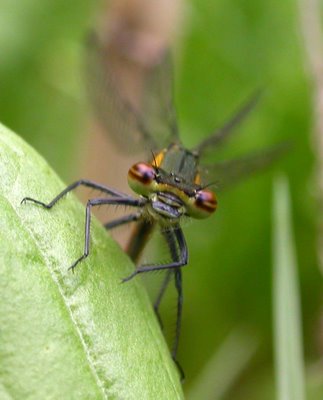 I found a large red damselfly, Pyrrhosoma nymphula, resting in M3 by Thistle Moor yesterday evening. It was half asleep so quite easy to photograph.

It is one of the first damselflies on the wing and I usually see a few around the garden each year. I am pretty sure they breed in the small pond about 6 or 8 metres from M3.

I was struck by the similarity in colour and pattern of the damselfly's body to that of the highly venemous coral snake - see top picture - and this is, presumably, an attempt to discourage predators by looking like something that might be toxic. Coral snakes do not occur in North West Europe and my guess is that this is simply parallel evolution of deterrant colours and pattern.
No comments: 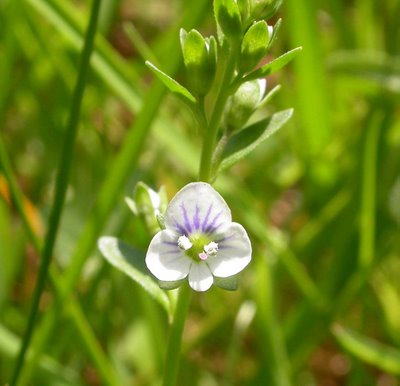 Another flower has opened in The Waste, the thyme-leaved speedwell, Veronica serpyllifolia. I found one plant of this about 18 months ago by Yew Edge on the west of the metre square and there are some plants growing there today that may be seedlings of this. The new one though has come up in the grassland at the highest pont of The Waste and is well able to compete with the quite vigorous other plants there.
No comments: 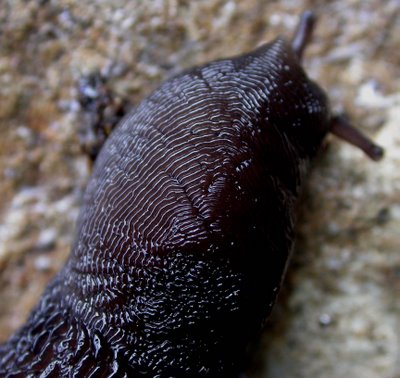 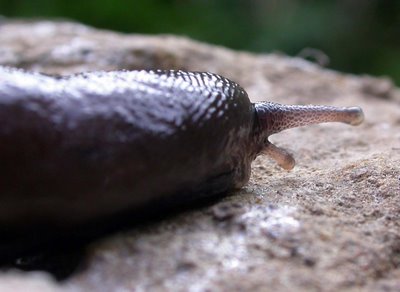 There was a large black slug, as is often the case, under Pitfall Rock today. While photographing other smaller things I noticed that the slug had a rather fine fingerprint pattern on the mantle (just behind the head - see above), so I took a picture of this. I also managed, by accident rather than design, to get a picture of the black-spotted tentacles (also above).

On checking the identity in the Field Key to the Slugs of the British Isles I discovered that it was an ash-black slug (aka ash-grey slug) Limax cinereoniger. In the literature it says this is a species of ancient woodland, indeed it is regarded as an indicator species. Although we have an ancient woodland at the bottom of the garden, it would take some stretch of the imagination to regard M3 as wooded, whether anciently or not. The slug is officialy designated a 'Notable/Nr' species(meaning 'regionally notable).

One conchologist has said this species does "not occur in woods which look like or are known to be plantations, and their discovery is probably as good a piece of evidence as can be had that a wood is on a primaeval site."
No comments: 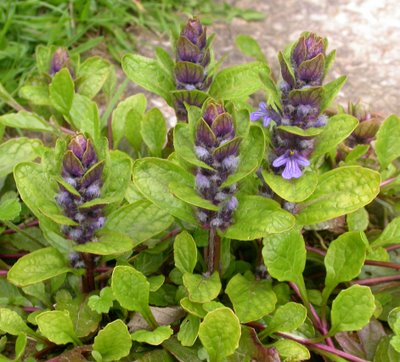 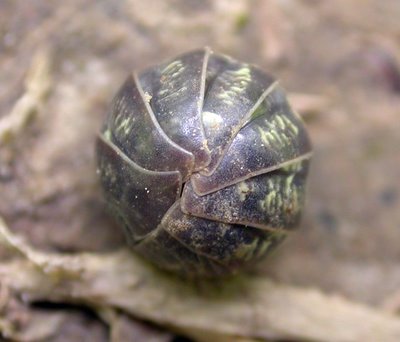 The first bugle flowers opened on May Day, a fitting welcome for summer (if one takes the seasons as starting on the cross quarter days).

The Metre also seems to have been invaded by the common pill woodlouse, Armadillidium vulgare ('granfergrigs' as we used to call them when I was a child in Somerset). There were six or eight yesterday and this is usually the scarcest of the six species I have so far found in M3. For several to appear at once implies that they go round together like the Seven Samurai. As the picture above shows, A. vulgare always rolls up into a perfect sphere with all its bits tucked in.
No comments: