A swarming of ants

A quiet moment in Emthree on this our 50th wedding anniversary, the golden wedding. The rowan and spindle to the east are full of ripe, or ripening, berries.

It was a sultry afternoon and the ants decided to swarm. At first I caught sight of a glitter of wings on my sempervivum tufa rock that sits above the stump that collapsed under me the other day and that the wrinkled ant queens, males and workers were coming up from there.

Some 15 minutes later, when I was sitting down again I heard an almost continuous rasgueado of feathers from the side of the ancient yellow meadow ants’ nest to the east of Emthree. A non-stop flight of queens and males were heading up into the sky southwards from the hill and the bristly scraping sound was coming from a young blackbird that was enthusiastically anting by gathering the unfortunate insects in his beak and rubbing them under his feathers.

After a few photos I returned to my seat only to discover a new congregation of the same species of ant milling about on Butterfly Rock. All these flight episodes began and ended very rapidly – 15 or 20 minutes maybe – and it is one of the very few times I have seen the yellow hill makers out in the sunshine in any numbers. 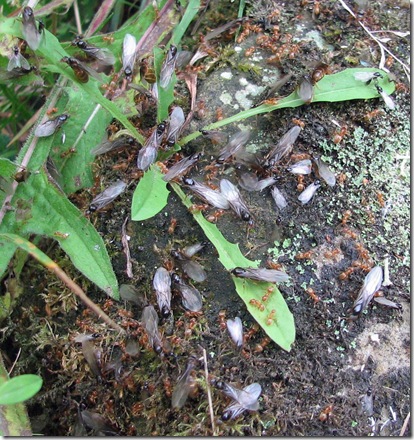 So far as I could make out the males are small and black (see top right of the picture, on the leaf) and the queens much larger with black thoraxes but yellowish bodies both in contrast to the wholly yellow wingless workers.

The whitethroat isn't there

As I stood in the 9am sunshine yesterday, having just given the tortoise his lettuce, a small  bird flew into the tall Thistle Heath birch.  It was a whitethroat (Sylvia communis), of the most delicate mouse-beige with a paler puffed out throat and breast where it kept all its songs.

It had something white in its beak - a moth maybe - and was trying to dash its brains out on a slender branch while keeping a wary eye on me.  After a few seconds, satisfied with its impending breakfast, it retired to the thicks of the medlar tree.

Sylvia communis can be roughly translated as 'the common woodlander' and, though common enough, it was bird I had not seen in Emthree before.  Though not currently threatened, according to the British Trust for Ornithology "a drought in the western Sahel region of Africa in 1968 caused a 90% drop in the number of whitethroats breeding in Britain; a crash from which numbers have still not fully recovered."

This bird inspired me to take the picture below of the Thistle Heath birch (not including whitethroat), a plant that appeared in the Square Metre in the summer of 2003 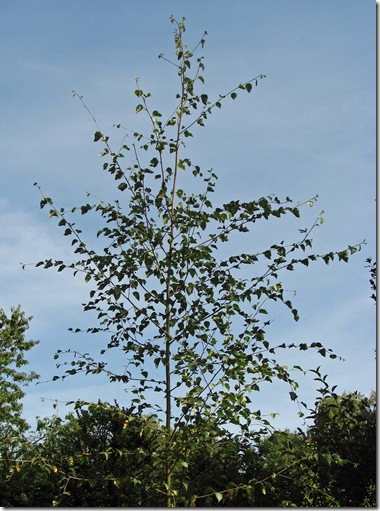