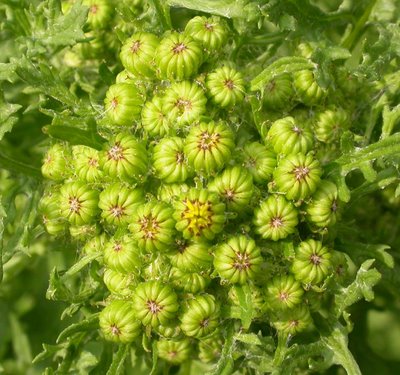 As the ragwort plants in M3 come up to flowering, they present a variety of forms from the rich purple stems below to the tightly packed buds above and the intricately cut leaves in between.

The plants will flower for many weeks, until deep into the autumn and, judging by previous years, will attract a wide range of invertebrates.

After flowering they will die and this is one of the best ways of getting rid of ragwort if you don't want it as the seeds normally only germinate in bare, scuffed ground (like overgrazed horse fields).
No comments: 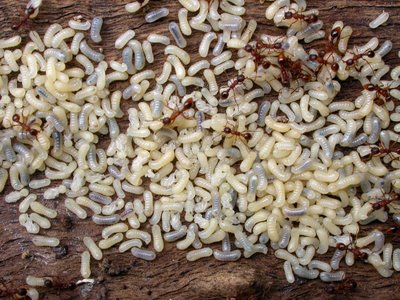 This insect is one of the most intrigueing in M3 as it moves about en masse from place to place and occasionally disappears altogether. In the warmer months these ants are often busy under Gingerbread Refuge, a piece of wood at the base of the north wall of logs. Once I saw them winding their way in a column up the dead stalk of a marsh thistle plant like pilgrims ascending the outside stairway of the Malwiyya, the spiral minaret of the Great Mosque of Samarra.

In winter they go to ground somewhere and emerge during the first warmer days of spring. Recently they abandoned Gingerbread Refuge, but a few days ago they started coming back and today I found them with the brood of larvae (see photo above) which, I suspect, must have been brought up from secret chambers somewhere underground to be in a warmer place so as to complete their development more quickly.

As with the slugs, it is difficult to understand quite what these and the other ants live on. Whatever it is there must be plenty of it, but all I ever see is the stray worker lugging some bit of detritus towards the nest.

These red ants are often accompanied by tiny, white springtails called Cyphoderus albinus that rush around among the workers like an animated pieces of scurf. When the ants go Cyphoderus goes too like a camp follower.

These ants put up with a lot from me as I turn over the various refuges under which they shelter, but they are great survivors and I admire their industry and tenacity and their long season of complex activity.
No comments: 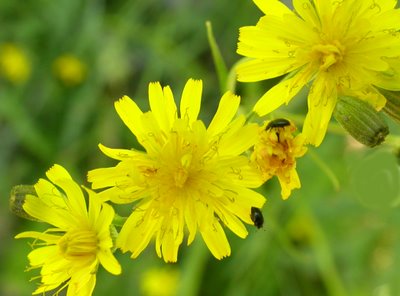 One of the most characteristic plants of M3, the smooth hawksbeard, is now flowering well and, if it is reasonably mild, it will continue into January. Like many composites (Asteraceae) the flowers of this widespread plant open in the morning and are usually closed by mid-afternoon whatever the weather.

The leaves are very bitter and, while they are sometimes used in salads in mainland Europe, they are eaten by very few animals and there are always many undamaged wintergreen plants. I have seen recipes for a country wine made from the flowers too (like dandelion wine), but I suspect there are far better options for the home wine-maker.

The plant is surprisingly polymorphic, some examples having quite deeply serrated leaves while others are almost smooth in outline. M3 has flowering plants over a metre tall and some less than 10cm. Mostly they are biennial, but some plants appear in spring and flower by late summer.

The flowers at this time of year are usually crowded with the small, black Meligethes beetles shown in the picture, but so far in 2006 they have been rather scarce. I am trying to find out if this fall in number is widespread.
No comments: 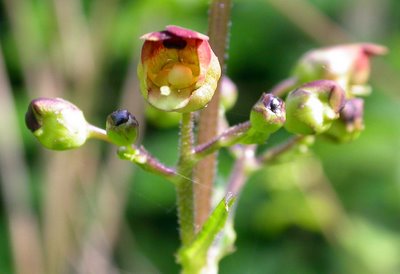 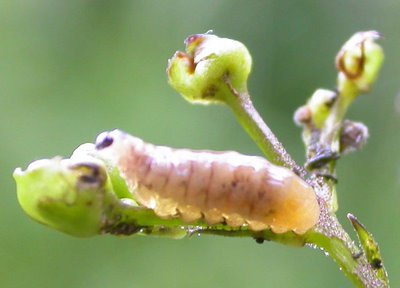 Recently the two plants of common figwort, Scrophularia nodosa,in M3 have started flowering. Not exactly showy things, but with a quiet, velvety brown and green beauty.

This morning I spotted several slug-like caterpillars in the flower head of one of the plants where they had been making a fine mess chewing the blooms to pieces. I think they must be larvae of one of the Ciona weevils,probably C. scrophulariae, but I shall have to wait for some adults to absolutely sure.

By the evening they had all gone, either to pupate, or because they had been eaten by something.
No comments: 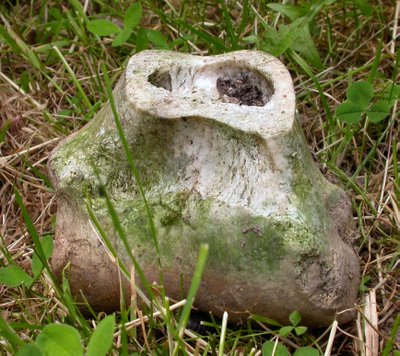 Today I found an ancient, or fairly ancient, piece of bone about 6 or 7 metres to the south of M3 on the other side of the path through The Meadow. It looks like the sawn off head of a cow's femur.

I cannot recall ever buying anything like that, so it may have been transported into the garden by a fox or badger or one of the children. Anyway, I have put it on a high point of newly cut Waste in a sunny position between Butterfly Rock and the Lyon Stone. I particularly want to see if lichens or special mosses develop on it, though a fox or badger or child may take it away before this has time to happen.

As time goes by this project looks more and more like a bower bird's nest.
No comments: 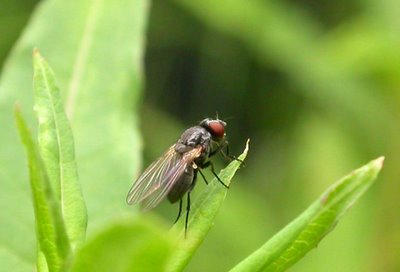 Every summer I come across dozens of flies like this in M3. Although they look similar – the little brown jobs of the fly world – they have many small differences between species. In the case of this group it is particularly the bristles of the legs, head and thorax that help to define each species.

The genus Fannia has many species ranging from orange yellow to jet black. They breed in a wide range of decaying vegetable materials and other substrates and present the entomologist with that fascination of subtle variations on a theme that one often encounters with wildlife and, indeed, many other areas. Stamp collectors, for example, often pay large sums of money for stamps with minor imperfections or variations and there are many sought after forms of our ordinary, non-commemorative British postage stamp (the Machin definitive).

This is the sixth Fannia species that I have recorded in the Square Metre.
No comments: 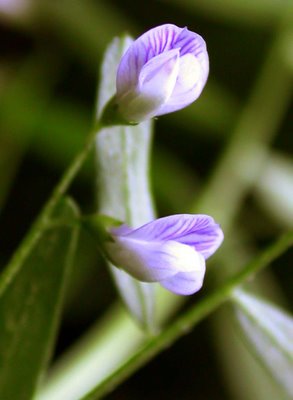 The smooth tares in M3 are now in full flower, though that seems a bit of an overstatement for something as tiny and inconspicuous as these blooms.

In close up they are attractive and patterned with what look like pollen guides, but I have never seen any insect make a visit (though this can sometimes happen after dark). However, they set plenty of seed so are presumably self-pollinating. Soon their four-seeded pods will develop: mouse peas as they were sometimes called.
No comments: 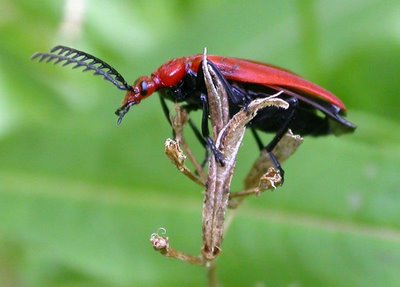 Every year a few of these beetles appear in the Metre at the end of May and beginning of June, having spent their early stages in dead wood somewhere nearby.

Usually they are very active in the daytime scrambling over the vegetation like slow acrobats. They are quite large beetles and they weigh plants down, so they sway in gentle parabolas from one stalk or leaf to another. There is a scarcer relative, the black-headed cardinal beetle. It does occur in the neighbourhood, but I await the pleasure of welcoming one to M3.
No comments: 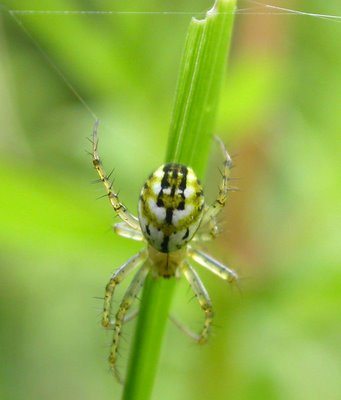 A very attractive small orb web spider, Mangora acalypha, appeared in The Waste today spinning a web between one of the rosebay plants and some grasses.

Although widespread in southern England, often in heathland locations, there seem to be rather few Sussex records, from the heaths in the centre and west of the area and in my own parish of Sedlescombe about 500 metres from home
No comments: 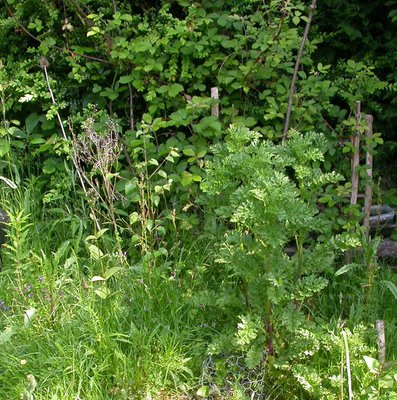 I thought it might be worth posting a photograph of the Square Metre at the beginning of each month just to show what it looks like. So here is the June picture taken square on from the south. Trouble is the photograph does not really look much like the real thing with the eye constantly focussing and re-focussing on the detail.

Features in the picture include the tall, 5-stemmed ragwort towards the right and the dead ragwort from last year left of the birch tree. Bits of box are poking through the brambles trained up North Wall. In front there is the wire netting guard to stop rabbits eating the dandelion, Taraxacum pseudohamatum. The wire could go now.
No comments: 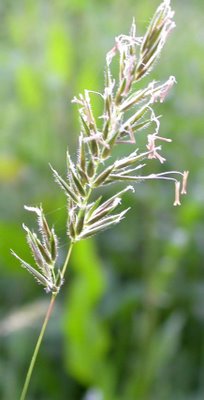 Though it remains cool and damp with frequent rain showers, the evening Metre presents a splendid orchestration of green shades and shapes lit here and there by soprano notes of magenta and yellow and basses of dark purple and brown. There are highlights and shadows, silvered droplets and quantum entanglements of leaf and air.

Writing, as I often seem to do, about the indescribable complexity of late spring M3 brings the artist Monet to mind and the way he painted and re-painted his lily pond and other subjects: always different and always the same.

As though to echo my own ruminations the sorrel, the ragwort and the birch have all reached to about one metre tall, all seem to stand within an invisible cube or a ball of air.

The birds sing, the bees hum, the midgelets bite my head. It is the first evening of another month, the month when haymaking starts, the month of midsummer.
No comments: