29 November 2017.  A bitterly cold north wind today.  The only movement was a ghostly winter gnat Trichocera that rested briefly on the birch trunk.  Not the best of images, but will try to get a better one. 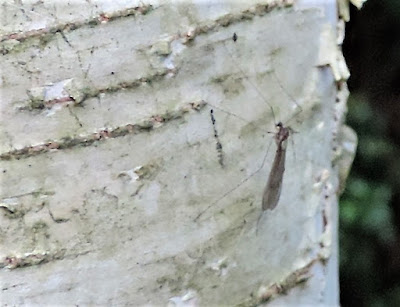 28 November 2017.  In cold weather I take a longer walk to M3 so that I am warm when I get there and in better condition to hang about.  My favourite route is down our lane and into Churchland Wood, a distance of about 500 metres.

When I arrive at M3 I currently seem to be greeted by an angry wren rattling away in the bushes.  Today I cleared a few dead bramble stalks, pruned some more of the box back and noted a fly (the Muscid Eudasyphora cyanella) briefly resting head down on the sunlit side of the birch trunk.  This 'greenbottle' overwinters as an adult and is often about in the colder months.

25 November 2017.  Now the colder weather has arrived (there was a grass frost this morning) there is less that catches the eye, but some of the evergreen plants come into their own.  The shining green curved blades of false-brome grass (Brachypodium sylvaticum), for example.  It is one of those plants that is an invasive alien in parts of North America, but seems perfectly well-behaved here.  It grows mainly in light woodland, or woodland edges in South East England and is well-established here on the north west corner of the square metre. 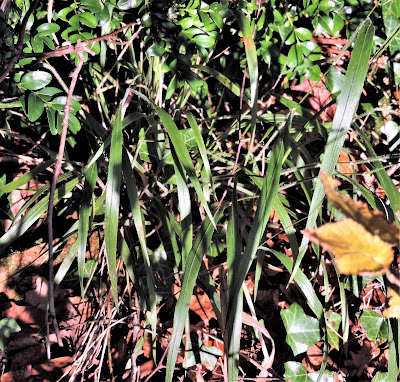 On the north east corner I place a block of freshly cut chestnut wood in January 2013 as a refuge (Gingerbread Refuge) for small creatures. After nearly five years it shows no sign of decay, nor has it been colonised by lower plants. Compare with the untreated mossy log in front of it. 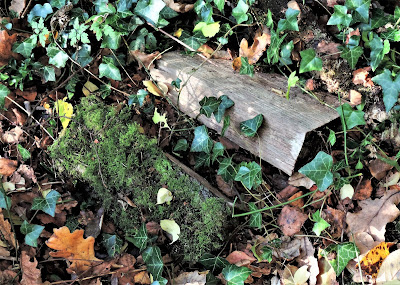 On the south west of M3, I noticed that the base of the hornbeam has been covered by an attractive 'sock' of common feather-moss (Kindbergia praelonga), a very common species in woodlands and hedges on decaying trunks and living trees where it has the habit of climbing up from the ground.  After a burst of enthusiasm for mosses and liverworts around the turn of the century, I have rather neglected them and may try again over the winter. 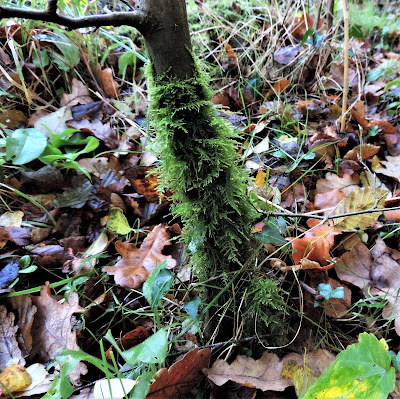 Over in Medlar Wood, now a new glade due to the effects of the fallen incense cedar, I straightened up the small privet plant that has been establishing itself for at least five years.  It is our common wild privet, Ligustrum vulgare, and not to be confused with the hedging privet of gardens, L. japonica.  I have come across it occasionally in our area and we have some in the front hedge, but I do not think it is native here.  The slow-growing plant below was, no doubt, sown via the droppings of birds perching in the now vanished branches of the medlar. 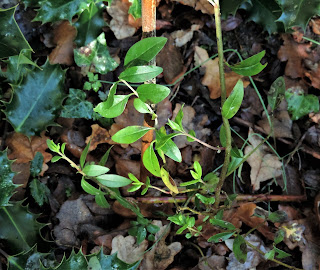 18 November 2017.  Granddaughter Samantha borrowed a wood chipper yesterday and ground up lots of the fallen incense cedar to make pleasantly scented paths into M3.  I walked down today in November rain, but found very little that was new.  There is one red rose hip on the sweet briar and a black, grey and white magpie feather near Butterfly Rock.  Is that a bird to record?  A few winter gnats (Trichoceridae) ghosted slowly through the damp air.

15 November 2017.  Halfway up the main stem of the ash tree there is a fairly large lesion.  It may have been caused by the wild rose stalks rubbing against it, but lesions are also one of the symptoms of ash die back disease.  Will find out in due course. 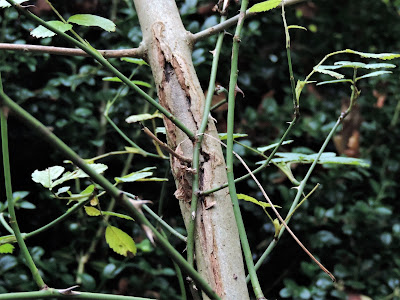 By the old yew log I found a tiny toadstool - a Mycena I think.  At first I thought it might be M. rubromarginata, but it does not have red edges to its gills.  I shall leave it at that. 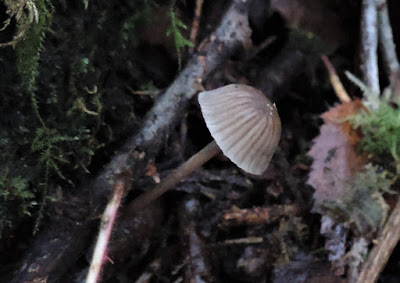 14 November 2017.  The gladdon irises, Iris foetidissima, are doing well this year and seem to be spreading in the wider area.  They brighten up the part of M3 I call Medlar Wood, though the medlar branches were broken by the fall if the incense cedar.  The irises like it here because the seeds were dropped by birds perching in this vanished part of the tree.  It will be interesting to see how this area develops with the advent of light. 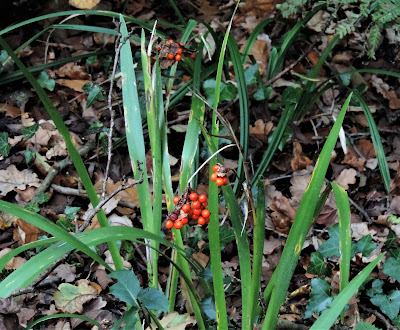 13 November 2017.  Very cold again today with a biting northerly.  I looked at the fallen  leaves on M3 which seem to be more than usual.  I decided not to clear any away but to see what happens to them as time goes by. 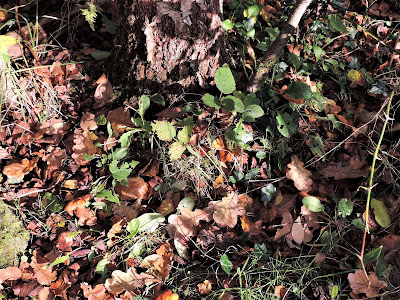 At the top of the photo above is the base of  our oldest birch tree.  Since it was a seedling it must have displaced a fair amount of soil and I wondered where it had gone.  Compressed into a smaller space?  Creating a shallow hillock?  Pushed further down into the ground?  Distributed, in part along the roots, trunk, branches and leaves?

12 November 2017.  Clipped back some of the box on the northern side of M3 as it is beginning to encroach over the Metre itself.  Very cold so didn't stay long.  Noted one poorly developed toadstool Lactarius quietus I think,

11 November 2017.  I heard today on TV that England has been moving northwards on its continental plate by around 4 cm a year.  If this is correct it means that, over its 14 years, the Square Metre will have moved some 56 cm, just over half a metre (probably northwards).  I feel this gives the Square Metre two dimensions: that of a square of land on a moving continental plate and that of a congruent  square defined by its latitude and longitude.  Two squares with one moving, one stationary.  After 25 years there will be no overlap - I will have to bear this in mind.

10 November 2017.  I did the annual trim of the hornbeam, cutting it back to 1 metre in height and shortening side shoots to preserve its cylindrical shape.  I also topped out the oak at 1 metre.  There was a blue tit hopping about in the hedge and under the remains of the medlar.  It made a rather deep twittering sound more like a wren and I fancy there was a wren to in the background.  Although the cats only left last weekend, the birds seem to be coming back. 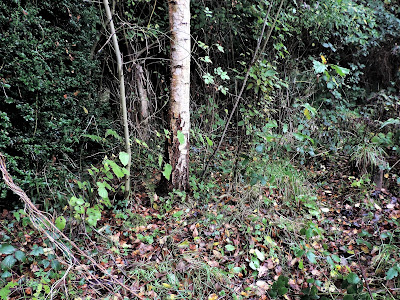 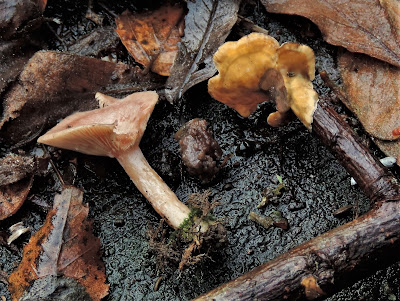