Yesterday I found a small moth resting on the trunk of the larger birch tree in the Metre itself.  It turned out to be the Oecophorid Semioscopis steinkellneriana, Steinkellner's flat-body. 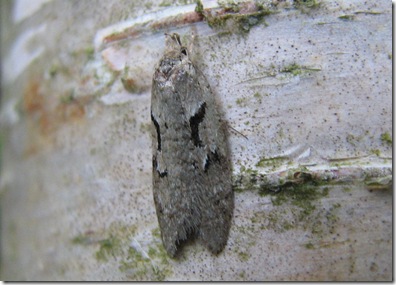 This species has larvae that feed on blackthorn and rowan (neither of which grow in the Square Metre), so its choice of a birch trunk seems purely fortuitous.  It is not very well camouflaged either.

On the sallow next to the birch I spotted a small, black sawfly caterpillar feeding alone. 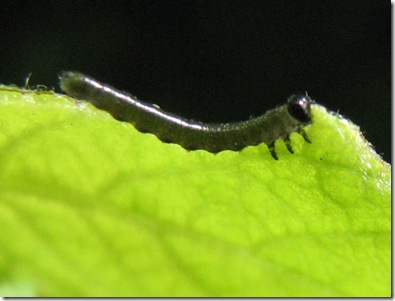 It does not look like the widespread Nematus pavidus as this seems much paler and feeds gregariously on sallow.  I will just have to see if it survives long enough to get a picture of the full grown larva.  It seems quite aggressive, raising its rear half angrily when disturbed and it feeds quite openly, often a mark of distastefulness.

Bugle flowers are now coming up to their peak all over Emthree as ‘blue steeples' (an Austrian term for the plant) and it is, as Geoffrey Grigson says in his Englishman’s Flora “A most lovable and inexhaustible little plant.” 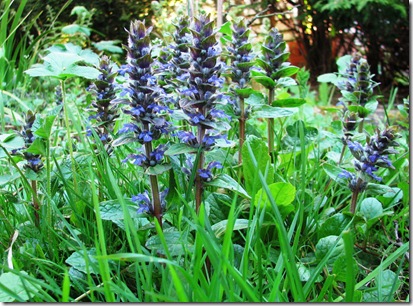 These days it seems to feature only rarely in books about herbs and forageables but in the past it had quite a reputation for helping to heal wounds and cure whitlows etc. As Gerard wrote “The decoction of Prunell made with wine and water doth join together and make whole and sound all wounds, both inward and outward, even as Bugle doth. To be short, it serveth for the same that the Bugle serveth and in the world there are not two better wound herbs as hath been often proved.”

Bugle also does not seem to welcome many invertebrates. Although the flowers are popular with carder bees and some hover flies, rather few species choose to eat it. Those that do include the larvae of the yellow and black sawfly (Athalia cordata), one micro moth, the aphid Myzus ajugae and the Eriophyid mite Aceria ajugae. I have found all these except the mite in Emthree over the years.

The ash and the ants

A colony of wrinkled ants, Myrmica ruginodis, has appeared under the Lyon Stone.  Much later than usual and normally by this time of year there are several large colonies.

This evening I spotted two individuals that had climbed to the top of the ash tree, now just over a metre tall, and were browsing eagerly on the tiny glandular hairs that cover the new leaf stalks and petioles. 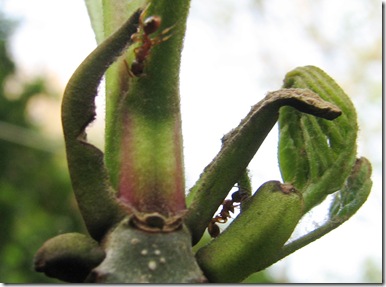 Such attractions are known as 'extra-floral nectaries' (EFNs) as they are not associated with flowers and they occur on quite a wide range of plants (including narrow-leaved vetch in the Square Metre).

The hairs produce a sweet material containing various sugars and other substances and are clearly both tasty and nourishing as far as the ants are concerned.  What advantage the plant gains is not clear, but is has been suggested that the ants discourage other insects and herbivores both of which might damage the plant (I find that unconvincing).

Like others with ash trees I am scrutinising our Metre plant regularly for ash die back disease, but it seems fine so far.  However, as spores of the die back fungus are dispersed from fallen leaf stalks of the tree, ants might well unwittingly transport them from the ground to the most vulnerable parts of the plants. 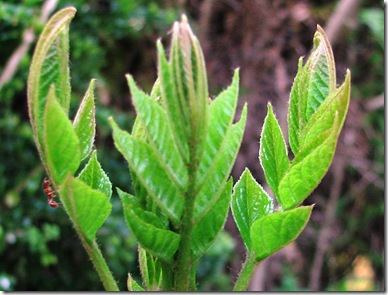 Note the ant on the left of the above picture of the terminal shoot of our tree.

Where have all the insects gone?

Another example of natural biodiversity.  The south west slope of The Waste, in the penumbra of the Square Metre, I counted 26 different plant species all self-sown and growing happily together. 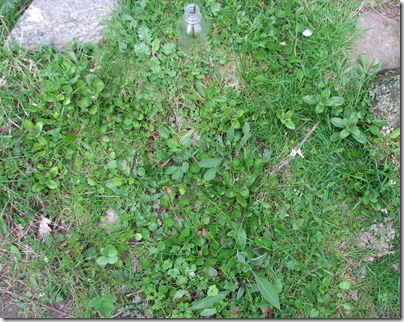 There is a yellow meadow ant's nest at the top of the picture and the plastic half bottle in the centre is to try and draw the ants up to ensure they have not deserted.

Insects still seem very scarce and I have not yet found any ants' nests.  Yesterday the first butterfly settled in Emthree - a speckled wood  Today a green longhorn moth, Adela reaumurella, came to rest on a leaf of red campion, its long antennae blowing about in the chilly May wind. 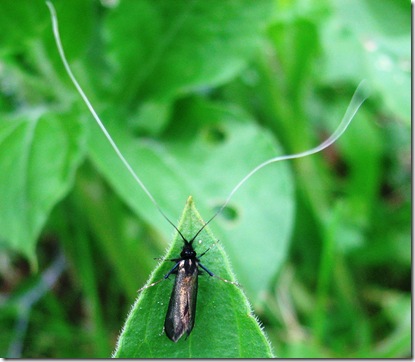 Yesterday I heard a buzzard mewing its way over Churchland Wood to the east.  Eventually it appeared wheeling over our garden and I had a clear sight of it directly above the large birch tree.  Unless one actually comes and settles in Emthree, this is the nearest I reckon I will come to a buzzard record.