In windy weather such as we have had today, I always enjoy watching the large birch tree in the Square Metre as it rocks backwards and forwards.  As well as sap drips, unopened catkins have landed all over the ground beneath and the twigs that come down too seem to be quite fragile, though the tree in general seems to be scarcely damaged.  Around the bottom of  the trunk the ground moves as the tree sways and it is a marvel that the roots can hold the whole overground tree upright.  I don't know the volume of the birch but it must be at least a cubic ton.  The ground doesn't sink as this, or any other, tree grows, so I take it that virtually all its substance comes from the atmosphere.  The picture below shows the base of the trunk.  Note the climbing ivy showing a preference for the rough, dark bark. 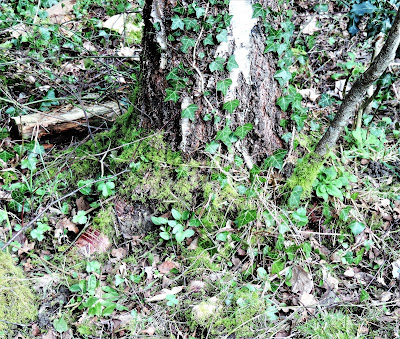 Despite the wind the bumble bees were still active though two of them sought shelter among low vegetation for ten minutes or so before off foraging again.  The picture below shows a buff-tailed queen well tucked into ivy and red campion leaves at the base of the birch. 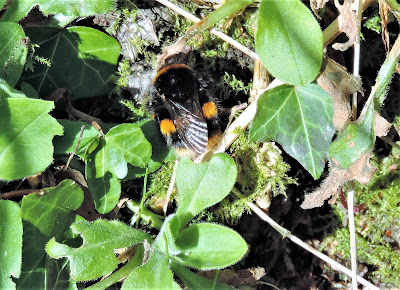