1 September 2010 A return to Emthree after a long period of neglect – what a religious might call a spell of spiritual dryness. Partly my motivation has returned after reading a passage in Karen Armstrong’s The Case for God (see below) and partly because it was a wonderful sunny September day after a spell of indifferent weather. 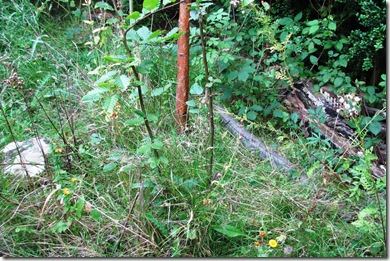 The pond is full, the medlars are ripening.

Later I did a little micro-management: cutting aggressive brambles and some grass; allowing a little more sunshine to reach the yellow ants’ nest. The wild rose is doing well but the sallow has sad yellow leaves caused by some microfungus.

A cloud like a skeleton of a prehistoric fish lies in the blue sky to the south among the sounds of aircraft.

Anyway, here is the passage from Karen Armstrong:

... the cult of ‘sacred geography’, [is] one of the oldest and most universal religious ideas. Certain places that stood out in some way to the norm – like the labyrinthine caverns of the Dordogne – seemed to speak of something else. The sacred place was one of the earliest and most ubiquitous symbols of the divine. It was a sacred ‘centre’ that brought heaven and earth together and where the divine potency seemed particularly effective.

It reminds me of what I wrote on 23 November 2003: “There are several Metre3s: the one I observe nearly every day, the one that modifies my view of other places, and the one I imagine to be there when I am not. There is also, I like to believe, a second Metre3 in another world and maybe beyond that a third where everything is the same but magically different – a half-glimpsed, half-understood possibility.”   As Archie Hill wrote in The Second Meadow (1982):

I often asked myself who had passed through the gate leading into the Second Meadow — the great thinkers and poets, painters and music-makers? Yes, these must have passed through.

Who then had passed into the Third if it be there — and surely it must be there? Christ, Plato, Beethoven? The few precious people who had stood upon great mountain peaks above all others, those rare geniuses who were linked together but separated by the distance of centuries?

Yes, I thought, these above all had at least passed into the Second Meadow, and perhaps into the Third. New, uncluttered mental and spiritual pastures.. . voyagers of the universe within...

I shall never get there but, like Archie Hill or St Paul seeing through a glass darkly, I might get an inkling of an understanding with the help of Emthree.

2 September 2010 What I thought was a slime mould turned out to be a seaworn flint buried in North Wall.

The wrinkled ants were swarming by the doll’s head – quite late I thought.

A short-legged harvestman fell on me from somewhere and I put it safely on a ragwort flower head. 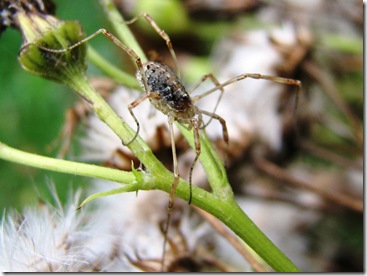