Today I noticed that some of the lichen/moss sward on the top of Butterfly Rock was missing and I found these patches of fairy cup lichen, Cladonia pyxidata, lying higgledy piggledy on the ground. 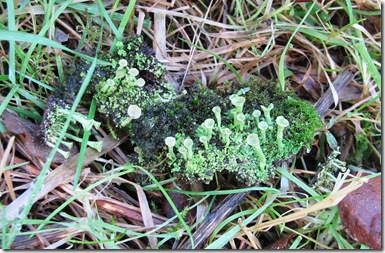 Undoubtedly they had been cast aside by hungry birds searching for insect larvae.

It is often written that Cladonia pyxidata is, or was, used as a cure for whooping cough.  This seems to originate with John Lightfoot who wrote in his Flora Scotica (1777) "A decoction of this moss is sometimes given by the vulgar to children to cure the whooping cough but the good effects of it are not supported by proper testimonies.".  However, under the rubric pyxidatus he included what sounds like several different species of Cladonia which he called 'common cup-moss or lichen' (lichens in the 18th century were thought to be kinds of mosses).