Now the weather is milder it is easier to do some work in Emthree and yesterday I started to clear back some of the long and untidy grass that has been blanketing the ground since last autumn.  Underneath it is thick with moss and I discovered some tubers on the base of one of the stems of common figwort (Scrophularia nodosa). 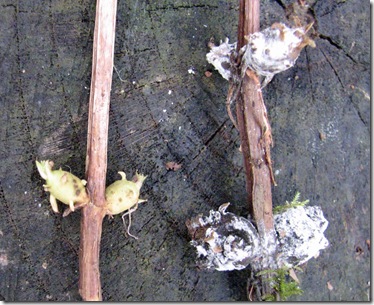 The ones lower down the stalk had been attacked by a white mould or mildew and looked dead, but the smaller upper pair were still in good shape.

These tubers (which are perfectly normal structures rather than galls caused by an external agent) were much used in the past against conditions like scrofula (hence the scientific name Scrophularia) and hydrophobia.  In the latter case it was recommended that the dried tubers were powdered and sprinkled on bread and butter after which one was supposed to take a long and energetic walk wearing far to many clothes for comfort.

Another discovery was a scatter of rabbit droppings along the mossy top of the yew log on the edge of Medlar Wood.  Positive evidence that they are still active in Emthree. 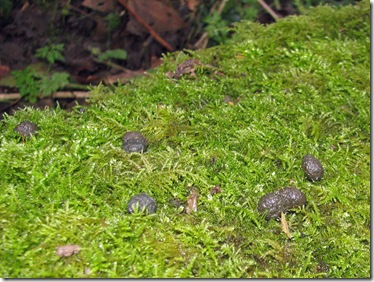