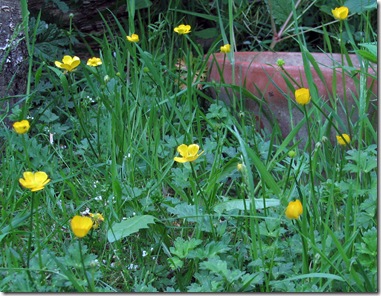 16 May 2008 The smaller birch has many wiggly leaf mines but the larger tree does not seem to be similarly affected.

The black bryony is now about one metre up its pole.

21 May 2008 I have at last done some serious labouring. I tied back the brambles and physically pushed them into North Wall and the box bush where the thorns have, for the moment, held them fast.

Heath speedwell (Veronica officinalis) is in flower now and pink is showing on the bud on the campion flower in The Waste. I have found new shoots on the gipsywort, now in its third season and seemingly not minding in the least that it is not growing in a wetland. The only plants struggling a bit are the square-stalked St Johnsworts which appear, once again to be suffering some sort of fungal attack on the leaves, distorting them and somewhat stunting the growth, and a ragwort that has keeled over.

Creeping buttercups (see picture above) are putting up a respectable show of flower for the first time since this project began. In the past they have been rather shy flowering.