Cynthia, my partner for 62 years, died a year ago today and, like then, it is a beautiful late spring morning.  God speed my darling.

Just above Troy Track I found a seedling tree which looks rather like a wild service, though it may be the offspring of the American  Crataegus with service like leaves that grows not far away.  I shall have to keep a careful watch on it.

I think some buds are starting to develop on the Cotoneaster (? frigida) that grows on the edge of Medlar Wood.  A large shoot of tufted vetch has appeared in Brambly Hedge beside my seat.  This is new, and very welcome, in the Green Sanctuary.  I have now counted four dandelion seedlings close to the large western dandelion.

Plenty of insects about today including the flying black carabid that appears at this time of the year; Rhingia rostrata, a local hoverfly and orange tip butterflies visiting bugle along with carder bees.

A year ago today this would have been the last day of Cynthia’s life as she died in the small hours, maybe around three or four a.m. on 22nd April. She was familiar with M3 through my conversation and the various radio and film outings, but I think she was never able to go down the garden and see it. However, I feel she is with me when I make my daily visits.

Today a holly blue – a fallen fragment of Heaven – came and visited the Green Sanctuary.  There were also the usual speckled woods and a passing small white.  There was a warm southerly wind and the ground is already getting quite dry after a very wet winter..


Four dandelion plants were in bloom, the larger eastern and western and the two smaller one on Troy Track by the spindle trees and I continued my hand grazing, this time along the spinal stones of Cynthia’s Ridge.

Sunny but with a cool and strong easterly blowing. The speckled woods seemed to have calmed down a bit but were still enjoying the Green Sanctuary as a sunny glade. The red admiral also put in a brief appearance.

After the flowers have faded on the dandelions their stalks lie flat, or almost flat, on the ground while the seeds develop within the tightly folded bracts then when they are ready they rise up to present the dandelion down to the wind. The first of these dandelion clocks appeared today on the far east of M3 by Troy Track.

There was a resumed fall of male birch catkins and I saw the orange underside of a flying dock bug for the first time this year.  I took a photo of the birch tree a few days ago to show its impressive curtain of hanging catkins. I noticed then that the trunk divides into two towards the top of the tree and think this may mean it has grown as tall as it can and now intends to spread outwards.  We shall see. 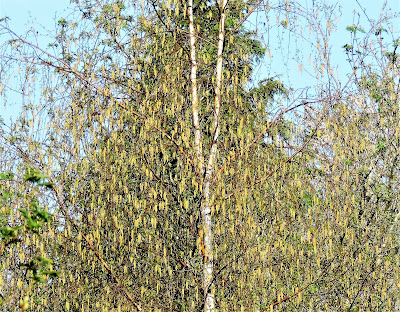 I have been watching the willow herb plants develop. We have two or three of the so-called weedy species and they seem immune to any sort of attack by animals or microfungi. I must investigate. 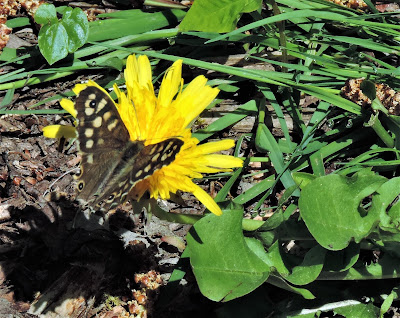 The speckled wood butterflies were very active today with a male chasing the female all over the place but never quite catching her.  They rested on pale coloured perches or shining leaves and one visited the western dandelion.  There was also a fine fresh red admiral that stopped briefly on its way through.  Difficult to believe it had emerged from hibernation or flown in from mainland Europe.  It looked as though it was freshly emerged from the pupa which would indicate the species is breeding here (as the climate gets warmer?) 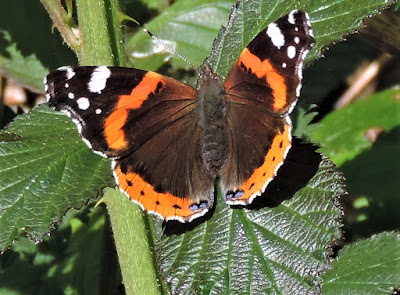 Nomad bees are now fling about close to the ground.  I think the species we have here is ruficornis, but I don'r want to catch one to find out.

Some of the looping wild onion leaves have changed from curves to inverted Vs rather like the coronavirus graphs that are constantly being shown on TV.

Some of the leaves on hogweed and sycamore seedlings are overshadowing smaller plants today, so I have started a system of control by selective hand grazing.

Ground wetting rain overnight with droplets on the vegetation rainbow-filled and sparkling in the morning sunshine.

The ground was strewn with birch catkins like brown and yellow caterpillars knocked of by the rain.  I must look out for the birch catkin bug, Kleidocerys resedae.

Bugle is at its best, with stiff, blue spikes of flower. The largest group is  over by the edge of Medlar Wood.  It seems particularly attractive to microfungi with some 57 species recorded from it but apparently only two insects attack it, the scorched blunt marble or bugle marble tortrix moth Endothenia ustulana and the aphid Myzus ajugae.  The moth larvae live in the roots and later the midribs of the leaves and, in Sussex, it is a very rare Red Data Book species.

Chilly today with a little rain.  There was a small solitary bee in one of the dandelion flowers perhaps slowed by the cold.

A shoot has emerged at the top of the grey willow (sallow) I cut back to one metre in height last autumn.  The whole plant does not look in very good condition - perhaps it is growing too close to the tall birch, but the new shoot looks healthy enough.  I think maybe I shall call the tall birch Alta Betula and the short one Parva Betula.

There is a light snowfall of wild cherry petals blown from the trees further down the garden and some creature has dug a snuffle hole in the patch of bare earth just south of the oak cordon.  Maybe a badger.

There are one or two bluebells within a couple of metres of M3 and I wonder when they will eventually appear (making the area even more like ancient woodland) in M3. Young ash leaves on the sapling on the south east corner of GS make a lovely filigree of green dipped in honey.

The pendulous sedge in Medlar Wood is doing well, but has no flower spikes yet, whereas others in the garden do.  There are four dandelion flowers, all on the periphery of the project..

Because of the Covid-19 lockdown there is a birdsong-filled silence in the surrounding countryside until someone starts a lawnmower.

Common sorrel (Rumex acetosa) is now sending up asparagus-like spikes, red flushed at the tip, sorrel sprue.  Small buds, also with a reddish flush, are lengthening on the oak cordon too.

The grey squirrel visits most days and races round nearby trees like a caged monkey flicking his tail and making an irritated scolding sound a bit like a duck quacking.

I was watching an ant through my close focus binoculars when it fell into Pork Pie Pond, apparently because it was not looking where it was going.  It thrashed around a bit on the meniscus but soon found the side and was easily able to climb out up the patina of mud and algae on the glass..

The long gap of six years is explained by the fact that I have been consigning my thoughts to another blog http://ramblingsofanaturalist.blogspot.com/ However, I am moved to return to plain text as I like writing and, hopefully, can move the imaginations of readers more subtly without the glitz of brightly coloured digital pictures.

Much has happened over the last six years: Cynthia, my partner for 62 years died in April 2019, I am now 82 and not in the best of health and have pretty much given up paid work. For the past three months or so the world has been in the grips of the flu-like coronavirus, Covid-19. We, that is my daughter Tana and me, are like the rest of the British population currently in ‘lockdown’ and unable to leave the house and garden except for a few purposes like food shopping and brief exercise. Perhaps this enables me more easily to be able to concentrate on projects like this one.

The Green Sanctuary, though seemingly less species rich than it was, presents a very complex pattern of biodiversity and apparent good health. It has developed a pleasing structure which, to my mind, is just as good, if not better, than a garden and it can be relied on, more or less to look after itself.

Today, as I type I am listening to Les Boréades, an opera written by Rameau when he was in his eighties, I think. There is a lovely interlude called Entrée pour les Muses, les Saisons, les Heures et les Arts which I heard being played by an Icelandic pianist just before I went out to see the Green Sanctuary. I think it would make excellent background music..

Words are only a tiny percentage of the wealth of reality (whatever that is) that a human brain can deliver from a project like this. But where does the reality land?

One thing that puzzles me is that several shoots of ivy have started to climb the tall birch tree but, so far, they only grow on the rough black areas of bark and not on the white. But how does it choose? I am sure ivy does not have agency but there is some factor that influences the shoots. Soon, as they climb, they will run out of black bark and I expect they will then take to the white.

Flowers are starting to appear in rapid succession. Today the first red campion was out, joining herb-roberts, forget-me-not, bugle and dandelions. Two plants of the latter were in golden flower like miniature suns. I have been watching both since last summer and they were seldom unchanging. The leaves altered from summer to smaller winter form and flattened themselves closer to the ground. Buds and flowers only appeared in the last week. The two plants differ in various small features from one another and I feel sure they are separate microspecies, but it is difficult to decide which using the BSBI’s dandelion book (Dudman & Richards, 1997). However, I appeared to be confident about doing this a few years back!

Quite a wealth of fauna today: carder bees, a queen Bombus pratorum and a queen wasp. Various solitary bees and hoverflies on the dandelion flowers and drone flies around Pork Pie Pond[1]. Most impressive was the resident speckled wood butterfly that basked in its usual place on Cynthia’s Stone Ridge and periodically took off for a fly round, or to see off intruders. It had some fierce battles with another speckled wood, the two butterflies spiralling round one another into the branches of the medlar tree and beyond.

[1] Pork Pie Pond is a wide-mouthed glass jar that originally contained a Polish pork terrine.  After the contents were consumed I turned the jar into a small pond buried towards the south west of the Square Metre where I can see it easily from the place I usually sit.  I keep it topped up with rain water.