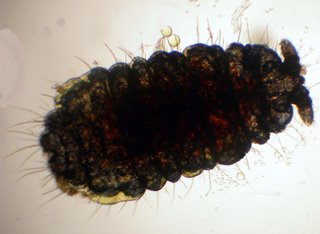 From time to time I tap the teasel head that lies in Mice & Red over my net and a variety of invertebrates fall out. Yesterday there were a couple of flea beetles and a bristly springtail, Neanura muscorum (see above). This is a common and widespread species, though little recorded in Sussex and not one I have seen before in the metre quadrat.
No comments: Links to this post

Yesterday a fine large flat-back millipede, Nanogona polydesmoides,turned up under a piece of wood in M3. They disappear for most of the winter, but are common in a range of sizes in the warmer months. This is designated a UK BAP Species of Conservation Concern since, though widespread and often common in Britain, it is apparently rare in mainland Europe.
No comments: Links to this post 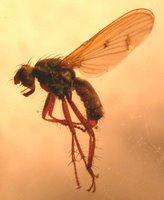 Yesterday I recorded a small 'nationally notable/nb' flea beetle, Longitarsus dorsalis. Like a small, black jewel with yellow 'go-faster' stripes along either side. It was on ragwort, its foodplant with L.gracilis, a much commoner species.

I also caught a female yellow dung fly, Scathophaga furcata which I have not recorded from the square before. It is said to breed in sheep dung or decaying vegetation: we have plenty of the latter and there are sheep in a field next to the garden.

Today the first hoverfly appeared in the cold sunshine - a female marmalade fly Episyrphus balteatus.
No comments: Links to this post

Introduction to the project

In September 2003 I started recording the flora and fauna from a square metre of ground in my garden in Sedlescombe, East Sussex, UK and to organise this small area to try and maximise biodiversity.

After two and a half years I have identified nearly 700 animal and plant species from the area (all of which have arrived under their own steam) and become deeply involved in 'management' issues in order to avoid the square turning first into a bramble patch and then into part of a wood.

There is considerable fascination in the surprising variety of life in such a small area. If it were larger it would be regarded as a favoured place as several legally protected and nationally scarce species have been recorded.

It also raises the question of how well we know anywhere and is a living demonstration of nature's constant dynamic of one habitat changing to another and species coming and going, flourishing and declining.

I do keep quite detailed notes on the project, but have only put some 'edited highlights' on this web log. Friends have often suggested that it would be interesting if others were to run similar square metres themselves so that results and ideas could be exchanged. So, let's hear from you if you feel like joining in.
1 comment: Links to this post