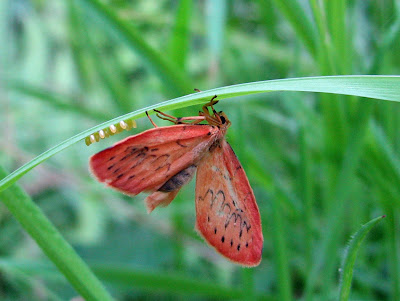 I found a rather battered female rosy footman moth (Miltochrista miniata) hanging from a grass blade over Troy Track today. As the photo shows she was laying eggs, eggs that confirm the description give in Stokoe (1948):

"somewhat spindle-shaped, rich yellow in colour and placed on end with great regularity, at a little distance from each other, in rows of generally three to five eggs in each row."

The moth had obviously read the book.

The caterpillars eat lichens on trees, so this little creature's endeavours are a triumph of hope over adversity. It will all be worth it if I collect the clutch and distribute the hatchlings in the medlar tree that has a good vestiture of lichen. 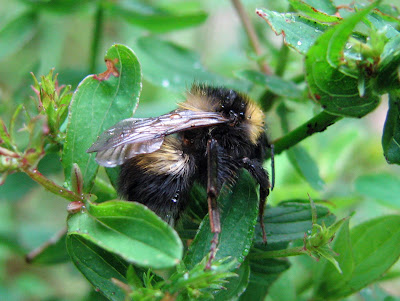 On a cold wet evening in July when the news bulletins were full of reports about the disastrous floods in the Midlands, I found a dying bumble bee on Troy Track. She was the epitomy of coldness and wetness and I picked her up on my finger tip and put her out of harm's way among the leaves of one of the hypericums.

By the morning she would be dead and the whole episode reminded so much of a wonderful passage in F. W. L. Sladen's 1912 book on the Humble-bee:

In the case of B. pratorum, and probably of other species whose colonies end their existence in the height of summer, the aged queen often spends the evening of her life very pleasantly with her little band of worn-out workers. They sit together on two or three cells on the top of the ruined edifice, and make no attempt to rear any more brood. The exhausting work of bearing done, the queen’s body shrinks to its original size, and she becomes quite active and youthful-looking again. This well-earned rest lasts for about a week, and death, when at last it comes, brings with it no discomfort. One night, a little cooler than usual, finding her food supply exhausted, the queen grows torpid, as she has done many a time in the early part of her career; but on this occasion, her life-work finished, there is no awakening.

Dolis and a ragwort moth 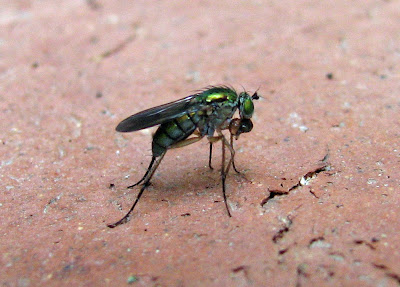 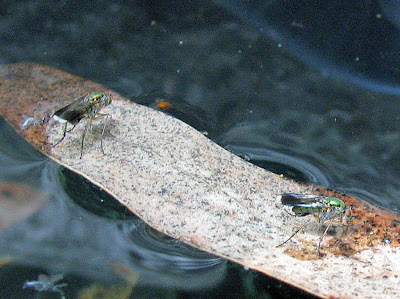 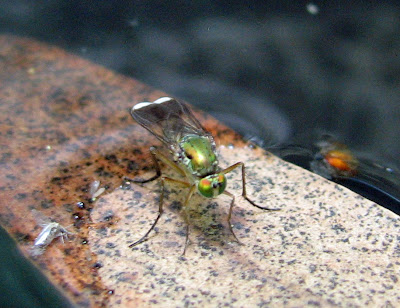 The first ragwort flower was fully out yesterday and glittering green females of a rather scarce dolichopodid fly Hercostomus chrysozygos (top picture) were skimming across Midsummer Pond, sometimes settling on the meniscus, sometimes on my Wadhurst Clay tiles or the ailanthus log. The one in the picture seems to have retrieved some morsel of food.

Today another dolichopodid (Poecilbothrus nobilitatus) appeared on the pond in some numbers, resting on floating leaves or the meniscus (middle and lower picture).

I also found a tortrix moth resting on a leaf by Troy Track. It turned out to be a retuse marbled bell (Eucosma campoliliana). The larvae feed on ragwort, eating the flowers or boring in the stem and this is one of the many species associated with the plant that must be suffering under the determined attempt to rid Britain of the plant because of its toxic effects, especially when dry, on horses and other grazing animals. There is a picture of the moth here.

There are some buds missing and one ragwort plant in The Waste collapsed a few weeks back, perhaps because a worm was boring in its stem, so its seems likely to be breeding in Emthree. Most of the Sussex records for this species are close to the coast.

I have been reading The Forest Within by Gerardo Reichel-Dolmatoff (1996) about the Tukano Amazonian Indians. I have been very struck by the chapter on their gardens and some of the parallels with what they do, and what I do in Emthree (but is not generally done in our culture):

"The Tukanoans always practise selective weeding and should the women find a tree seedling growing through the litter, they will carefully preserve it.

Although most of the area is occupied by manioc, the emphasis is upon diversity. Tukanoan cultivated lands are not fields in our sense, but are mixed gardens with a variety of cultigens. According to the Indians, plants grow better as parts of a diversified plot than in monoculture. People are equally opposed to the idea of domestication; in their view fruit trees, medicinal plants, toxic or narcotic plants develop best if left in their original environment where they can grow in permanent interaction with the local climate, soil, flora and fauna. A fruit tree, they point out, has its pollinators which, in turn, interact in their own way and have their own cycles. A tree may have its insect pests or vertebrate predators, but it also has its defenders; it has its vines and creepers and epiphytes, but they all have a function to fulfil in the tree’s life, and if this interaction is disturbed, the tree won’t thrive.

Part of the diversity one finds in a Tukanoan garden plot consists in the tangle of metre-high charred stumps, fallen trunks, upturned roots, lopped-off branches, vines and underbrush. The Indians run like squirrels over the skeletons of fallen trees, but a city-dweller will have difficulties in balancing along the slippery or rotting trunks, and in passing from one to another. To call this a garden and to claim that this could be a model for a sustained development seems ludicrous, but we shall soon learn otherwise.

What may look to us like a primitive clearing in the rainforest, in reality is an intentional combination of many components. In the first place, the litter of rotting wood, leafy shrubs and carbonised branches is, in the Indian’s view, an important part of the process of cultivation; it contains nutrients (‘energies’) not present in the soil, but which come ‘from above’, and which provide the cultivated species with an articulation with the forest environment, an interaction the Indians believe to be essential. This is not a ‘clearing’ in the forest or a ‘cultivated’ spot in a hostile environment, but a safe-hold, a second home where things may be grown thanks to the forest. In the second place, the felled litter attracts several important species of prey animals: paca, agouti, cavi, deer and armadillo. In this manner, a cultivated plot is an excellent place for what has been called garden-hunting. As the Indians see it, it is a bait, a trap set right in the forest. Next to attracting game, this environment attracts many insects, butterflies and beetles, and these in turn attract birds and lizards. In this variety of life-forms the Indians see a condensation of energies, of pollinators and activators of the cycles of insemination, growth and decay."

Year of the ringlet (Aphantopus hyperantus) 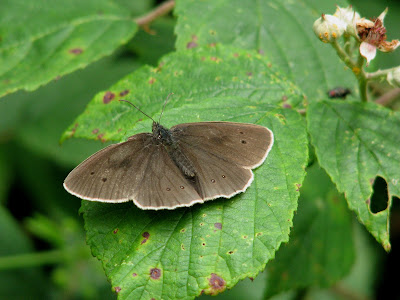 This year I have seen more ringlet butterlies than at any time during my life and in some places they are more abundant than the ubiquitous meadow brown (Maniola jurina).

The ringlet tends to like rather damp grassland along woodland edges, but I would not have thought the wet summer had anything to do with this year's abundance as many of the factors causing it would have occurred before the wet set in. The hot, dry April would not, I would have thought, have suited the butterfly or its grass-feeding caterpillars.

The example in the picture flew from this bramble leaf into the medlar tree that canopies Medlar Wood alongside Emthree, so I shall record it from there rather than from the Square Metre itself.