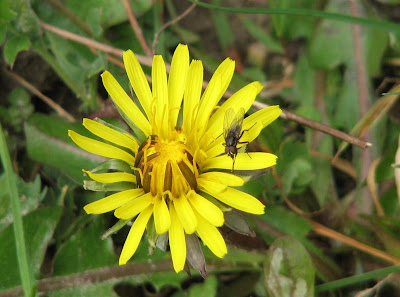 Rather to my surprise a flower opened this morning on the false hamate-lobed dandelion (Taraxacum pseudohamatum). The same plant flowered 24 days later, on 14 April, last year. Climate change? I doubt it, dandelion flowers seem to vary considerably in regard to when they appear.

I identify these Taraxaca to microspecies level if I can using the BSBI Dandelion book, but the results from the key are not always conclusive. T. pseudohamatum seems a clear enough form though.

The fly enjoying this spring treat is a sallow fly, Egle sp. 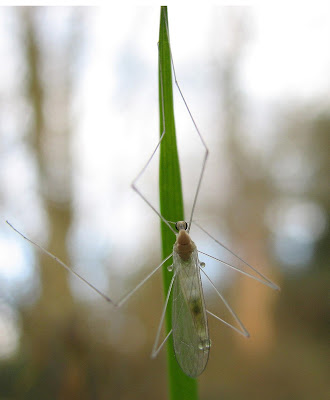 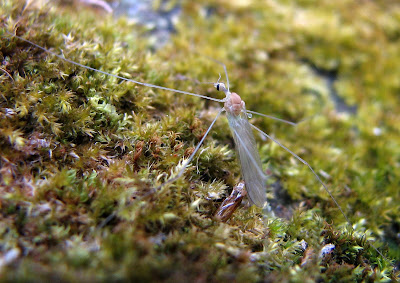 Right on cue for the first day of spring I discovered a freshly emerged, male short-palped cranefly on the moss on the top of Butterfly Rock. The pupal exuvia can be seen in one of the pictures above protruding from the moss just to the left of the wing tips.

After it had hardened its exoskeleton it started to move around and eventually settled on a grass blade beside the rock.

This sandstone rock has now been in situ for just under two years. It quickly developed a carpet of moss and lichen on its bare top and, earlier this year, this was thick enough to support some small vascular plants. Now an insect has completed its development in the moss - only two years from bare stone to invertebrate life.

The rock has also developed a cordon of plants around its perimeter that do not grow elsewhere in Emthree. I strongly suspect they arise from seeds brought in by birds who must also deliver a fair quantity of fertiliser that washes off with the seeds.
No comments: 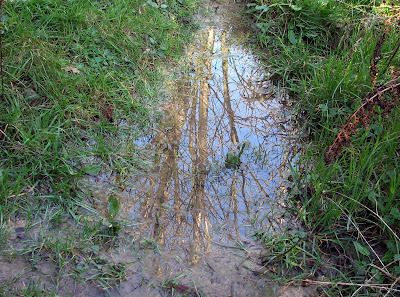 The other day I went to look at Emthree and found water running everywhere and all the holes and hollows full. It was clear and sunny and, although there had been some rain earlier, I thought it had not been enough to cause such flooding unless it was a very focussed cloudburst.

However, I quickly discovered that a water main had burst in a shed in the next door garden. The problem was soon fixed and the water drained rapidly away. One small bonus was that I was able to enjoy a tree reflection in a puddle in Troy Track, something that has not happened before as it is either raining on the water surface or dry.
No comments: 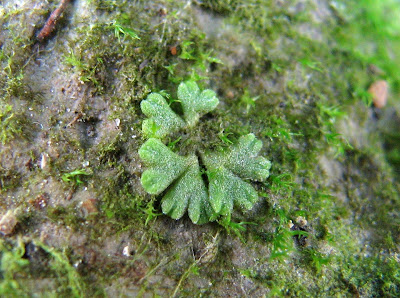 A star turn today was the 'appearance' of a distinctive plant on bare ground at the north eastern end of Troy Track. Not only is this a new record for the project, it is also the first hepatic - that's the smart name for liverwort. Double hooray!

In the literature common crystalwort is indeed said to be common, but I have somehow managed to live my whole life without ever consciously seeing an example. It is an annual species and will, I think, not grow very much larger.

As is so often the case, I spotted this (it is about 1 cm in diameter) using my close focus binoculars and it must have been where it is for some time without my having noticed it.
No comments:

At the north western end of Troy Track I spotted some rigid green leaves overtopping the grass. These turned out to be a plant of soft-rush (Juncus effusus) that must have been growing, undetected, for at least six months.

It reinforces my observation that it is impossible to ‘see’ everything, even in a small area, on one or several occasions. Seeing things like this rush for the first time seems to occur when, for some reason, conditions in the brain are right.
No comments: