The largest number of grasses is in flower at the moment giving a very high pollen count.  In The Green Sanctuary sweet vernal-grass and rough meadow grass are already over but Yorkshire fog  is anthesising now and seems to be having a good year.
Another grass currently in flower is the tall false oat-grass, Arrhenatherum elatius.  This spike is hanging over the Square Metre itself from a plant in Troy Track so maybe it will drop some seed in M3. 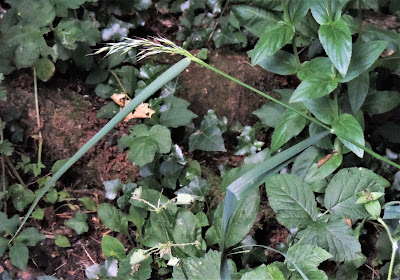 Still to come are the bent grasses (Agrostis spp.) of which I think I have several.  One species has leaf blades that stick out at right angles from the main stalks making a very pleasing 3D array of horizontals and verticals.  The cliché that nature abhors a straight line does not seem to apply in this case. 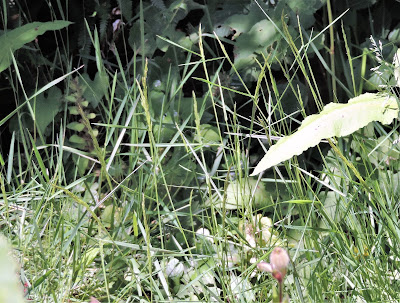 I wondered about the name 'bent' for these Agrostis grasses and, while I have not found any specific evidence, I think it must come from the word 'benedict' meaning 'blessed' in Latin.  This is sometimes given to plants of high worth in the shortened form 'bennett' as in 'herb bennet' (usually spelt with one t).  It is also contracted to 'bent' in other contexts as in the Danish name 'Bent' which derives from 'Benedict'.

The bramble 'hedge' that defines the southern border of The Green Sanctuary is now at its most attractive.  It is full of flowers with their crinkled petals and there are still lots of unopened buds.  The flowers do not last long and already green blackberry fruits are starting to appear.  In the photo below a small hoverfly (possibly a Melangyna species) appears to be seeking pollen and there are many other insects that appear on the flowers and leaves. 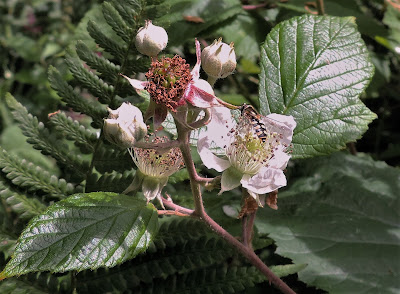 The earlier flowering grasses are going over now and the later bents and other species starting to send up flowering spikes.  Yorkshire fog is very easily identified with its silvery spikes that often do not seem to open fully and it grows in several places in The Green Sanctuary.  In the picture below one of the only open spikes is on the far right. 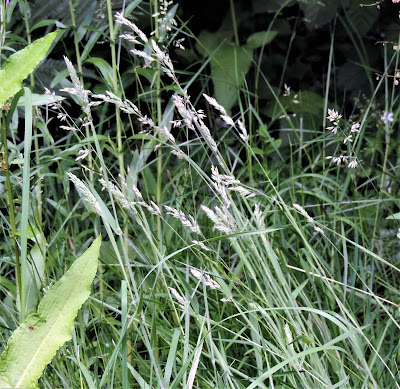 Apparently, the plant is called 'Yorkshire fog' because it was widely grown in Yorkshire in the 18th century to be threshed for its seed.  So far as I can discover the seed was used for sowing to produce a quick growing 'ley' of palatable young grass for farm animals.

Most of the leading shoots on the cordon holly in The Square Metre have been bundled up and the leaves partly eaten by what I think is probably the holly tortrix, Rhopobota naevana. 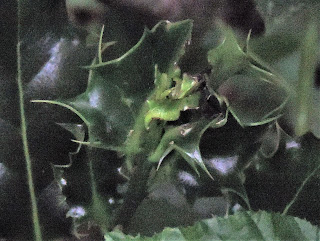 I also spotted some small leaf mines towards the tips of knapweed leaves and, using the online guides, it looks as though these are made by the larvae of the beetle Sphaeroderma testacea. 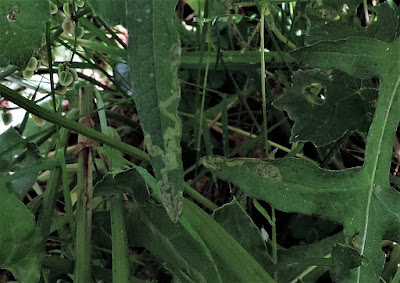 It has been one of the sunniest springs on record and one of the driest Mays but The Green Sanctuary does not seem to suffer in any way apart from the drooping tops to the wood docks and some other plants at the hottest part of the day. 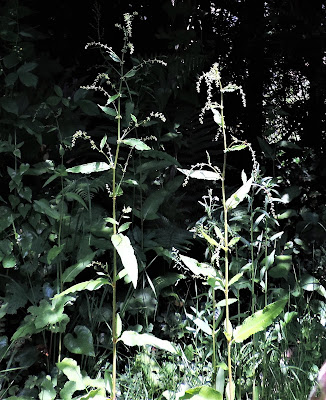 High up in the green mist of the medlar tree there are some flowers on the small-flowered sweet briar, Rosa micrantha, though the roots of the plant are in the Square Metre. 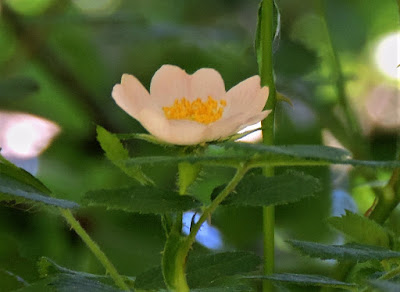 Back on ground level there are several plants of American willowherb, Epilobium ciliatum, starting into flower.  This is an alien species first recorded in the UK in 1891 since when it has spread very widely in many countries apart from Britain.  Curiously it is regarded as an endangered species in some American states whilst here it is one of our commonest 'weeds'. 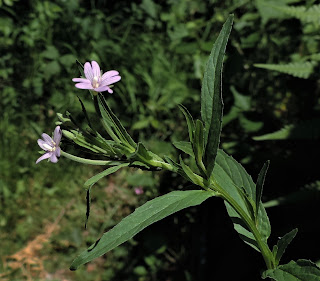